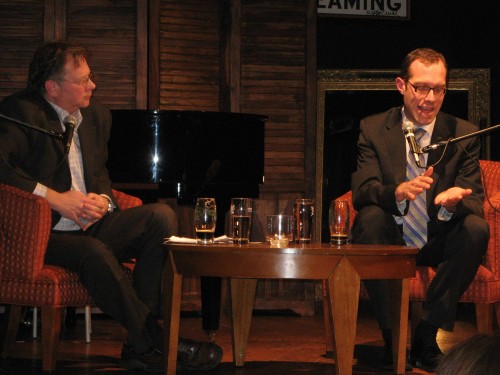 Call it a science project for grown-ups. One day, as a joke, longtime buddies Rick Smith and Bruce Lourie, environmental advocates from Canada, decided to marinate themselves in everyday chemicals for a week — innocent-looking things like shampoos, canned food, sofas with stain-resistant coating — and see what happened.

Why? They had been involved with Environmental Defence Canada’s Toxic Nation project, which has tested and found toxic chemicals in Canadians young and old and from all walks of life. But when those test volunteers asked what act, what product, used on what day had put the chemicals into their bodies…well, there were no clear answers.

So Smith and Lourie spent a week in a condo, trying to get polluted, and not in the alcoholic way, but with chemicals that are part of our daily lives. Said Lourie, “I didn’t drink a beaker of mercury. We did nothing millions of Americans don’t do every day.” Still, this idea “delighted our wives no end,” said Smith.

Last Wednesday in their first U.S. event, they told the tale of the resulting book, Slow Death By Rubber Duck: The Secret Danger of Everyday Things, to a packed room at the Busboys & Poets at 14th and V. In one experiment, Smith took lots of showers, using highly scented hair products, soap, shaving gel, lotion, deodorant and cologne. Lourie quipped, “Rick never smelled so good.” But did his phthalate levels go up?

Yes, and surprisingly so. (The good news is that you can avoid these chemicals and bring your levels down.)

In fact, in 48 hours Smith’s level of monoethyl phthalate (MEP) leapt twenty-two times above what it was before the experiment started. (Blood and urine tests were used to determine the levels of chemicals in Smith’s and Lourie’s bodies.) And, says the book, MEP has been connected with male reproductive problems.

Smith’s regimen included nine products, each containing multiple chemicals. He said it’s estimated that by the time the average woman has bathed and put on makeup each morning, she has applied about 150 synthetic chemicals to her body — unless of course she is using the many beauty products made from truly natural ingredients.

For a local angle, think about this. In November, we mentioned a new Potomac Conservancy report that showed up to 80 percent of the male fish in the Potomac have developed eggs. This is thought to be caused, in part, by phthalates from personal-care products getting into the river. So if that’s what it does to fish, using all-natural products might be a good idea for people, too. Speaking of fish, in other experiments Lourie ate seven tuna meals in three days and more than doubled his mercury levels, shooting them above the safe levels set by the U.S. Environmental Protection Agency. (Other fish are a safer choice.)

Smith’s day and one-half of eating canned food that he microwaved in a polycarbonate Rubbermaid container, and drinking from metal cans lined with BPA and polycarbonate plastic bottles, caused his Bisphenol A (BPA) levels to go up seven and one-half times. Compare this result on his six-foot, six-inch frame, he said, to the levels that might accumulate in an infant fed, from a BPA baby bottle, liquid from a can lined with BPA, every meal every day for months on end. (There are plenty of products on the market that don’t use BPA; hints on finding them are below.) Smith also used soaps and toothpastes and deodorants laced with the anti-bacterial agent Triclosan for two days and saw his levels of the chemical skyrocket 2,900 times higher than before the experiment started—a concern, considering that anti-bacterial agents can contribute to the development of drug-resistant “superbugs,” said the book. Again, this chemical is listed on all labels, and while it’s common in products, you can avoid it with only a little effort. ‘The fugitives from bathroom’
courtesy of ‘heiwa4126′

So if you don’t want to get polluted, what can you do? Plenty. After all, the very first sentence of Slow Death by Rubber Duck says the book is “downright hopeful,” and the title tells you it’s going to be funny.

The good news is that some of these chemicals, such as BPA and phthalates, break down easily, said Smith. “They fizzle up from the sun and natural processes in lakes and rivers.” And if we can stop producing more, what’s there now will start to degrade.

An exception is Teflon, which has been found even in polar bears. Teflon will be around forever, he said — like John McCain, Keith Richards, and cockroaches.

The easiest thing to do about these chemicals is to simply learn where they hide, and avoid them. 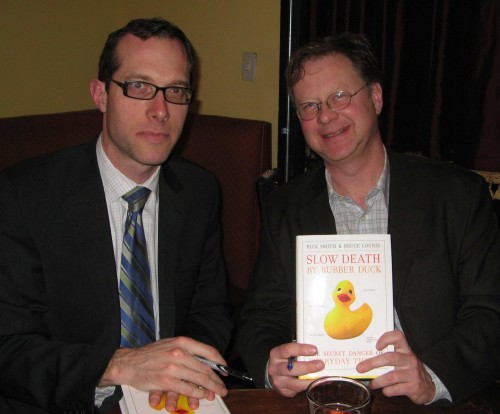 Smith and Lourie ready for autographs

To skip BPA, check the recycling code on plastics and use only the BPA-free ones. Smith said he remembers these through a little rhyme: “4, 5, 1 and 2; all the rest are bad for you.”

Learn which fish to eat (a chart or app can help), buy organic food and food in non-plastic containers when possible, and check for Triclosan and phthalates in the ingredient list on personal-care products. Phthalates often are lumped under the term “fragrance,” so choose products that are truly fragrance-free, and know that products called “unscented” sometimes contain masking fragrances.

And remember — you might need a sharp eye to find these chemicals. Smith said that his wife once bought him a pair of socks, and only later did he notice a tiny tag that said “Microban” on it. Yep, Triclosan was impregnated into the fabric to reduce odors; underwear sometimes is treated with it, too. “What kind of world are we building that you don’t have to wash your underwear?” he asked.

I don’t know, but I’m hoping that’s one he doesn’t decide to test.

5 thoughts on “Getting Polluted: These Guys Wrote the Book”