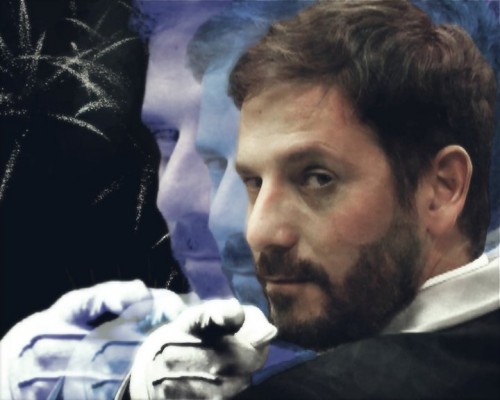 From giant mau5-heads to matching motorcycle helmets, gimmick based electronica acts seem to really capture the attention of the audience these days. What the on-stage persona of Deadmau5 or Daft Punk bring to their performance is a sense of absurdity and a sense of cool respectively.* With Stephen Fasano there is no such pretension or intention. When he dons his old-school tuxedo and picks up his magic wand with white gloved hands (seriously) this slightly goofy, bearded, mild-mannered Belgian transforms into a slightly goofy, bearded, mild-mannered Belgian in a tuxedo carrying a magic wand in white gloved hands. That’s it! That is what makes The Magician as a persona so great. It is the same guy; there is nothing covering his face or obscuring his identity except his huge, sincere smile!

I had the chance to interview The Magician earlier in the week and it was obvious from his answers about his persona that Fasano has a great sense of humor and wants to spread his genuine good cheer through humor and music. As Fasano explained, “The Magician only comes out as night…He likes to see people happy and dancing sexy.” According to TBD, The Magician brought along one magic wand for each of his eight North American shows; to reward the craziest dancer at each with.* Leading up to his set, I wasn’t sure how far Fasano was going to take the whole magician thing; but when he emerged behind the decks in his tuxedo, carrying his wand in one hand and his cd case in the other, it was obvious that he meant business. The business of delivering the audience a ridiculously good time.

The Magician worked his magic for two and a half hours on Wednesday night providing for another epic, crowd-teleporting, U Street Music Hall experience. I have to say that this venue just seems to bring the best out of the talent that comes through there.*** The sound system and the amazing dance-dedicated crowd seem to feed the DJs that I’ve seen there and for Fasano it was no different. The sounds that The Magician rendered with the U-Hall system were insane. Some of the bass lows were so strong that your shoes skidded across the floor with or without you. The high-end was also spectacular when Fasano dipped into 80’s synth-lines and disco keys (which he did frequently). The Magician’s high-energy set just kept getting wilder as people high-fived him, cheered constantly, gave him a blue-feather boa, and even pelted him with a black bra.

Inspired costume choice and good cheer aside, of course what we were all really there for was the music. Fasano spun a frantic multi-genre mix that never quite settled into one area for too long. There was an 80s throw-back feel to the over-all sound for sure, but it was more of an electro-disco “Giorgio Moroder scoring ‘Scarface’ on speed” feeling than it was a Duran Duran new wave one. Not that The Magician was entirely retro though, he expertly mixed old and new until they were indistinguishable from each other. For the most part Fasano deconstructed the songs into component parts and rebuilt them with live remixing along with plenty of break-beat loops and fader work. The over-arching theme of the music was high-energy and good spirits. There wasn’t much in the way of cold techno or industrialized beats. When the bass got heavy**** it had a buoyancy that got you jumping rather than punching along. The Magician also peppered plenty of fun sound effects, volume drops, clap-a-longs, and crescendo crashes into the mix to keep us all guessing. My favorite sound effect was the old air raid siren; so glad he dusted that one off!

Perhaps the defining moment of Fasano’s set came in the middle of his first hour. Still looking poised in his tuxedo, the wand tucked into his lapel, The Magician gazed out over the crowd with a serious look on his face as the sound dropped out completely, only to be replaced by a low-volume clicking. Still looking deadly serious, Fasano nodded his head once, clapped his hands twice (exactly like a magician signaling a curtain to drop), then unleashed the first massive beat explosion of the night. As the bodies around me convulsed in its shockwave, I caught a glimpse of a pleased smirk on The Magician’s face right before he turned his attention back to the decks. Abracadabra!

* Which he did at about the 1-hour mark during his DC set.

** Admittedly their larger than life techno imagery can be a lot of fun too.

*** Well, except for Afrika Bambaataa’s MC’s but the less said about them the better.

**** Which it did to an insane degree in the second hour. It would not let us stop dancing even to catch a breath.