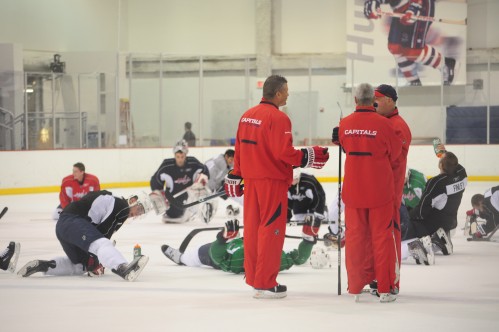 What to watch for: For the most part, Development Camp is not all that exciting. Off-ice (and away from public view) the prospects go through a number of tests, such as bench press and timed sprints. On-ice, there are a lot of drills, designed to test the shooting and skating abilities of the prospects. Don’t be surprised to see a lot of stoppages in the action while the prospects run a set play, get feedback, and run it a number of times after that. The most exciting things to watch will be the scrimmages on Wednesday, Thursday, and Saturday when the two squads of prospects play each other in actual hockey games.

Becca H over at Japer’s Rink has put together a remarkably thorough guide to Development Camp that I have no chance at matching, so please, check that out here.

Players to watch:
Goalie: The off-season, which has only just begun, has already resulted in a huge controversy regarding goalies for the Capitals at the upper levels of the organization. Within the lower levels, however, things are a little more clear. One of the top prospects in the Caps’ system is German Philipp Grubauer. The German prospect posted a record of 22-13-3 with 2 shutouts last year in the OHL. Grubauer, who plays for Kingston in the OHL and is making his second appearance at Development Camp, also represented Germany in the World Junior Championships, and is easily identified by his brightly-colored mask featuring the German federal eagle.

Defenseman: While most of the attention will be focused on more polished and offensive defensive prospects such as Samuel Carrier, Brett Flemming, and Dmitri Orlov, the Caps have also invited big, stay-at-home defenseman Dustin Stevenson. Although Stevenson failed to put up spectacular numbers for the ECHL’s South Carolina Stingrays, going 3-9-12, he is (literally) head and shoulders above many of the other prospects at 6′ 5″ and 220 pounds.

Forward: Another returnee to camp is forward Cody Eakin. Eakin, who almost made the team last year as a 19-year-old, had 36 goals and 47 assists in the regular season in the WHL (and was traded for FIVE players in a swap between Swift Current and Kootenay) and followed that campaign up with 11 goals and 16 assists in the playoffs en route to a championship. With the Caps extremely close to the NHL salary cap after their off-season spending spree, having almost-NHL-ready prospects such as Eakin and first-year invitee Mattias Sjogren who can be called up very cheaply means that these players could see the Verizon Center Ice sooner rather than later. 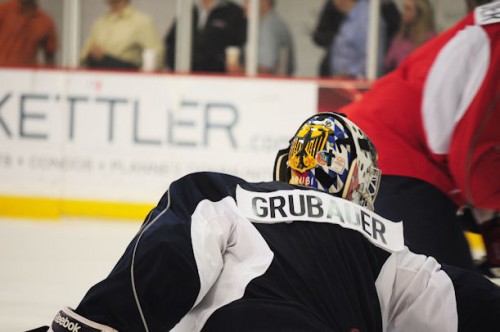 Since I will be covering Development Camp in person on Friday, July 15th, I’m posing a question to you readers: what would you ask a Capitals prospect? I will try to get a least a few of your questions answered, so post them below!