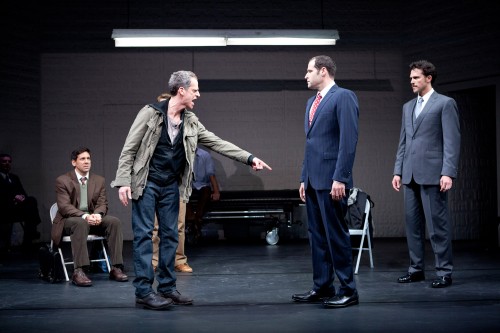 The stage is fairly empty, save for some scribbling on the white set – words, shadowy and illegible until the lights come up. Slowly, our eyes adjust and we make out some phrases published by the press in the early 1980s. The first one I can read is damning: “By our silence we have helped murder each other.” Before the first scene of The Normal Heart at Arena Stage comes to a halt, I’ve read the writing on the wall quite literally; and the writing tells me we’re doomed.

The Normal Heart – Arena Stage‘s nearly flawless production of the 2011 Tony-winning revival – moves with a thunderous pace and makes clear its own immediacy from its first scene to its haunting end. Never stopping to take a breath, the show instead devotes every moment to its characters and their dealings with the AIDS epidemic that began, largely unheeded, in 1981.

As each person struggles individually, their stories collectively reveal a culture in some ways foreign and in some ways all too familiar – from how AIDS first came about, to views of the “homosexual lifestyle,” and finally how the world responded and continues to respond to a virus with no known cause or cure.

The story follows writer and activist Ned, who is openly gay and demands that everyone he knows fight aggressively for more media coverage and resources on behalf of the dying community around them. In contrast, his closeted lover Felix fears for his own reputation and shies away from public combativeness. The couple reflects two sides of the AIDS epidemic while also showing how all sides need each other to survive.

Uproariously funny at times, emotionally intense, and hideously tragic, The Normal Heart includes a stellar cast and bold staging that give us a sense of impending horror. Patrick Breen as Ned Weeks and Luke MacFarlane as Felix Turner shine together and separately. After playing other roles in the Broadway production, they take on their new, very difficult characters with tremendous heart.

Along with a stellar supporting cast, Weeks and MacFarlane spend much of the show yelling. The play discusses extensively how AIDS tore relationships apart: families, friends, lovers, workplaces and communities were all affected, and thus all had something to yell about.

But the constant emotional highs didn’t annoy me in the slightest. The character yell for us, not at us. They show the emotion we want to express – emotion we all should have expressed when we learned for the first time that people were dying of AIDS. Patricia Wettig’s show-stopping rant in Act 2 particularly stands in the gap at a point in the play where we’d all probably scream if someone wasn’t doing it on our behalf. 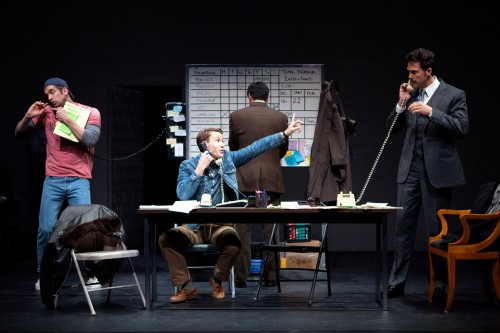 Playwright Larry Kramer spoke autobiographically from a place of deep rage when writing The Normal Heart, which was first produced off-Broadway in 1985 and is premiering in DC for the first time with this run. His words over 25 years ago still ring true: 75 million people are now infected with HIV/AIDS; the reputation of a promiscuous gay “lifestyle” still sounds hypocritical next to gay marriage bans; we still search for a cure; and we still know people who are dying.

The show is also a very DC-centric play. Though it takes place in Manhattan, Kramer considers DC his hometown and believes our city is currently the most important place in America for The Normal Heart to run. DC has one of the highest HIV rates in the United States – and in the world – at 1 in 20 adults. In part due to these statistics, our city is hosting AIDS 2012 in July, which is a biennial international conference focused on the virus.

During The Normal Heart‘s run, Arena Stage will be displaying portions of the AIDS Memorial Quilt around the Kreeger Theater and hosting discussions and other events relating to HIV/AIDS after select performances.

Whether you were alive for the early stages of this crisis or know very little about the fallout it caused in the early 80s, you will be astonished and moved by the events in The Normal Heart. Leaving the Mead Center I felt deeply saddened; and days later I continue to struggle with the heartache I saw represented there.

But the production also serves as a map for our future, calling us out of tragic ambivalence and into love that defies fear.