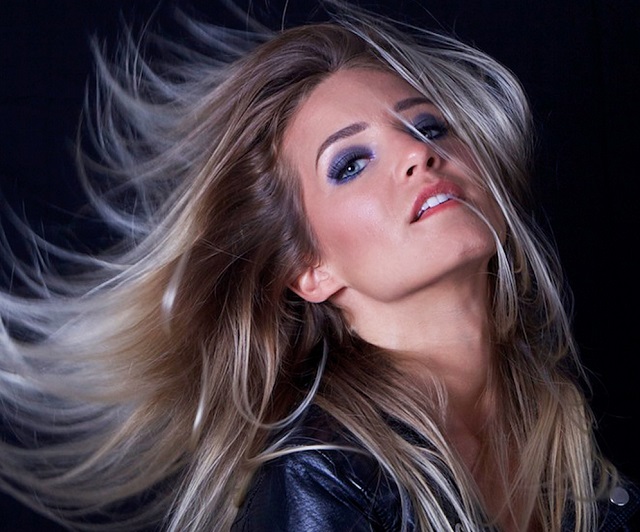 Nina, the latest indie-dance chanteuse from the United Kingdom, opened for Erasure in two sold-out dates at the 9:30 Club on Friday, Sept. 19, and Saturday, Sept. 20. If you enjoyed her show in DC or elsewhere, you’ll be pleased to know she has two solo performances coming up in New York City before she returns to London–Friday, Sept. 26, at the Pyramid Club in Alphabet City and Monday, Oct. 13, at Friends and Lovers in Brooklyn.

Watch her video for “We Are the Wild Ones” below and find out more about the artist in our interview afterward! (We talked to Nina Friday before her show at the 9:30 Club.)

Mickey McCarter: Songs like your new single “My Mistake” have a great dance beat but they are lyrically full of loneliness and regret? How do you reconcile that?

NINA: When I write, that’s mainly what I write about. It’s a lot about escape and love and melancholic things. When I write, sometimes I’m in quite a dark space; sometimes I can be in a happy space-–it depends!

I was collaborating with a band called Hunter As A Horse. We were kind of at the same level; we are very similar when it comes to writing. We write very dark lyrics about heartbreak and things like that. So it worked out really well. We also have that dance beat to it as well.

We have a new song, however, that’s slightly different. It’s a little bit more ’80s and a bit more happy. I thought I would try something happy and see how it works! It’s the last song in the set tonight. It’s called “Sweet Surrender.”

MM: This is your first tour of the United States? How’s it going? How have audiences reacted to your music?

NINA: Yes, and it’s amazing. It’s like a dream come true. I’ve always wanted to do this. The audiences have been amazing. People have been so friendly and they go out of their way to show their love after each show.

MM: It was a really good match, setting you up as an opening act for Erasure. They are a great band with an established following, and you’re a new act with a sound that the following can appreciate.

NINA: I really must say it’s been incredible how welcoming they are, and how many people say they love the sound. It’s similar but it is very mellow. At the beginning, I wondered if they would like it because they have come to dance. You know, Erasure! You just have to dance. But people love it, and it’s been amazing.

MM: How did you get here? Did you set out to do this kind of music?

NINA: No, not really. I came to the UK 10 years ago now in 2004. I came to do music. I was doing music a lot in Germany — I was touring around Germany, Switzerland and Austria but as a backing singer. But I wanted to break through and explore being a solo artist in another country.

The UK is so amazing and inspiring. I tried a few things before I got to where I am now. Now, I think I’ve really found myself. I know where I want to go and what I want the music to sound like. Before I was doing more dancey stuff, which was great as well. But now I’ve decided to go where my heart is.

NINA: Some of my songs are slow and mellow. But to compare it, what I did before was more Eurodance. It was very fast.

I’ve been working with Aztec Records for four years, but it took a while to find my own sound.

MM: Tell me what’s next for you? A new EP? A full album next year?

NINA: Yes, we are working on an album! We are probably going to release one more single beforehand. As soon as we get back to the UK, we are going to work on another UK tour and then work on the album.

The single will probably be “Sweet Surrender.” There’s no specific date for the album yet but I’m guessing we’ll release it in the springtime.hu

MM: Are you collaborating on the album with anyone that we should know about?

NINA: The Levity, a band from the UK. They also are very ’80s. They are absolutely awesome. They look great, and they sound great. We work well together. Their lead singer sounds very much like Brandon Flowers [of The Killers]!

Nina vows to return to DC and other US cities next year in support of her new album. Meanwhile, catch her in New York City before she becomes the next big thing!