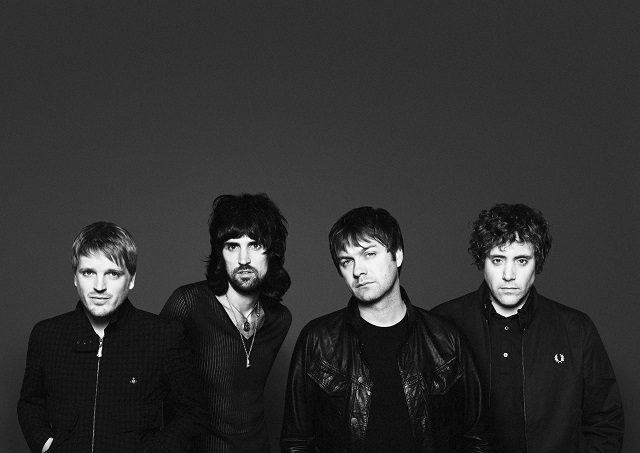 Neo-psychedelic quartet Kasabian play at the 9:30 Club this Sunday, Sept. 28, in support of their new album, 48:13 (named for its running time), and amazingly tickets are still available.

Kasabian sold out the 9:30 Club the last time they were here and reminded us why they’ve collected a lot of awards for best British live band. We Love DC chatted with guitarist and writer Sergio Pizzorno about the new album, some of its messages and why the band are great performers.

Mickey McCarter: The new album sounds great. How did it come together?

Sergio Pizzorno: From the outset, we try to make futurist rock and roll. The vision at the start was to make a forward-thinking rock record.

When we approach it, we don’t go in there to jam out. It comes from loops and drum patterns. The groove is so important. From the opening tune, when those drums kicks in, you know what it is. It’s become our signature.

MM: There are protests messages in some of the songs on this album.

SP: It’s giving a voice to the underdogs, the outsiders. We’ve been outsiders as a band. It’s trying to bring the people together, rally the people. It’s incredible when people get together. We try to bring as many like-minded people together. When you do that, anything can happen. You can move mountains.

MM: It seems like you’re affected by a lot of things going on today, particularly with surveillance and people being spied upon.

SP: I don’t know what to make of it all. It’s funny. Something like Twitter is like the ultimate spying system. I don’t think people realize it. If I go out to the shop, and if people don’t know where I am, then all you do is type my name into Twitter and within half an hour someone will say, I just saw Serge in the supermarket or I saw him on the bus.

It’s kind of mad! You’re walking around with this GPS in your pocket. No one really thinks or cares about it.

MM: Did you try to get more serious on this album in tackling issues like that?

When you’re really honest, it can be dangerous in some ways because it can come across as sentimental or corny.

With this album, I wanted to write a song that was directed to the fan. The people I see every night for the last 10 years of my life. The audience has become a big part of my everyday being. With “Stevie,” for instance, I wanted to give people a riot song.

Together, we are so powerful but we don’t know it yet.

MM: You guys have been called one of the greatest live bands ever, and you’ve won a lot of awards for that.

SP: Again, it’s the honesty. We mean it. In a lot of bands, and it works for them, they assume a character and they become someone completely different. Essentially, what it is, we mean everything we do. Every guitar hit and every word sang, we mean it.

We appreciate how fucking hard people work to get the money to buy a ticket and come see us play. We respect that more than anything. If we get off our asses and play a show, we are going to make sure that show you see is one you never forget. That’s how we’ve always been. We love doing it because it’s real.

MM: When I saw you last, I really thought you and vocalist Tom Meighan have a chemistry somewhat reminiscent of a young Mick Jagger and Keith Richards.

SP: I always say we are the manga cartoon version of them, like the manga futuristic cartoon drawing of them.

MM: We look forward to seeing you Sunday!

SP: We are always really excited at the start of an American tour, and we’re happy to be returning to the 9:30 Club. We’ve played the 9:30 Club quite a few times now!