When I heard on Tuesday around noon that the Foo Fighters were going to play a club show in DC to go along with the premiere of the second episode of Sonic Highways. When the news was confirmed by the Black Cat, people left their downtown offices and headed for the 14th Street club to stand in line. By 3pm there was a line, and by 4pm, it stretched for blocks. By 5pm, all hope was lost for the second half of the line.

When I arrived on Friday night, 90 minutes before doors, the line for entry stretched halfway to T Street. They opened the doors early, catching most of us by surprise. By the time ten o’clock rolled around, the crowd was thick and driving, as the monitors started the traditional HBO static. If you haven’t yet watched Sonic Highways, it’s something you need to see. From the Jazz Age of Ellington, to the rise of Go-Go and the bounce beat, to the Revolution Summer and the rise of DC Hardcore. Out of all of that, director Dave Grohl said, came the Foo Fighters.

It was an hour-long love letter to the DC of Grohl’s youth, the grittier, harder DC. A place where bands had to forge their own record labels to build an audience, a place where the hard scrabble of work met up with the idealism of the Capitol to influence style. From Minor Threat to Bad Brains, to all of the little single season bands that came and went like butterflies. Shirlington’s Inner Ear Studio was the venue for this episode’s recording session, where Dischord Records defined the iconic sound of 1980s punk music. The story of its owner and engineer, Don Zientara, is interwoven with the musical history of the District.

After the episode’s conclusion, the Foo Fighters took the stage and played an energetic three-hour set that spanned their twenty-year history and pretty much their entire catalog. They lead off with the first track off Sonic Highways and focused on the Chicago metro area. They followed with extended versions of The Pretender, New Way Home and Up In Arms and an extra long version of Arlandria, named for the neighborhood along Four Mile Run on the border between Alexandria and Arlington where Grohl once lived.

All Photos by Tom Bridge, Used with Permission

No one’s going to hold up Foo Fighters as if they defined an entire genre out of whole cloth, or as a groundbreaking effort, they’re not that sort of band. What they are is a damned fine group of entertainers. You need only look to drummer Taylor Hawkins, who played Friday night as if he was the living embodiment of the Muppets’ Animal. His frenetic play and mastery of his craft was absolutely electric on stage. Hawkins would take the lead on covers of Cheap Trick and David Bowie & Queen that Grohl would call reminiscent of the better art of the Springfield Keg Party band. Grohl bounced between showman and rocker, sometimes being nostalgic for the Springfield Keg Parties of his youth where, as he put it, “lesser musicians interpreted the greats”. That was shortly before they played David Bowie and Queen’s Under Pressure.

Probably my favorite moment of the night was Grohl calling up local band RDGLDGRN to the stage to make sure that everyone could do the chop in the middle of a gallop beat/bounce beat rendition of Monkey Wrench that I’m pretty sure has never been done before, and may never get done again. While the predominantly white crowd tried their damnedest, no one was mistaking the Black Cat for a Go-Go on Friday night, but that didn’t matter.

When I was 21, and finishing college in Ohio, I took a trip with my college radio station to New York for the CMJ festival. Shows, showcases, panels, all the good stuff, set against the megalopolis’ backdrop. The weekend smelled like hot garbage, the feast of San Gennaro, and it sounded like punk rock, rock n roll, and stuff too weird to categorize. What I remember from that weekend are two things: the diavolo sauce at Umberto’s Clam House is too hot for human mouths, and the Foo Fighters’ show at Bowery Ballroom. I also determined I’d never, ever want to live in New York.

That Foos show stuck with me, not just because it was hard to get in, but because I saw someone who did what he loved, did it well, and could have a good time doing it. I saw a lot of workman-like sets at CMJ, I saw more still at the Newport in Columbus, where bands would play meaningless sets with no drive or passion. I thought that was just an Ohio thing, but CMJ proved to me that the dead-eyed musician wasn’t something limited to the Buckeye state. When I moved to DC, I was petrified I was going to see more of the same. I was thankfully wrong.

What I did see on Friday, though, was a crowd that loves this city the way that Grohl does, and that shared environment that makes this place unique. There’s no question of The Black Cat’s place in rock history, but the places that DC Punk called home are long since gone and demolished to make way for a DC that the 1980s wouldn’t even recognize. Gone are the brutalist buildings of the 60s, and the older buildings that the riots ran down, and the 70s modern that’s made way for the cranes and the backhoes of the late 90s and mid 2000s. Places like the old 9:30 Club on F Street, The Bayou, and dc space are long gone.

I’m anxious to hear the rest of Sonic Highways as the first two songs have woven in historical elements of note both into the lyrics and into the musical structure. This is the sort of ethnomusicology that I find fascinating, and that some mark with terms like “cultural appropriation”. It’s clear from the episode this week that Grohl and Big Tony from Troublefunk go back a ways, as Grohl threw a party for Troublefunk at 9:30 Club early this year, and I would argue that, if anything, Foo Fighters is working to elevate the profile of Go-Go for additional attention. My main wish is that Grohl had done this years ago before Chuck Brown had passed, as while I enjoyed Troublefunk’s contributions, Chuck Brown’s would have been a next level grab for them.

There has been a lot of (earned) criticism of the last two albums from the Foos, that neither carried enough weight to have been from the band that gave us “There Is Nothing Left To Lose” and “The Colour and The Shape” which were triumphant pieces of both good writing and rock engineering. That is not something that I can attribute to either of the tracks that we’ve heard from Sonic Highways. If they’re indicative of the rest of the album, it looks like the Foo Fighters are back to their old selves. That’s a welcome development. Look for them to play a large arena show next year (RFK stadium perhaps, given the picture of them with DC United Jerseys with #15? That would be excellent.) and I look forward to seeing them play again.

As the three hour set drew to a close, with one song left to go before last call, I wondered if Grohl would make Everlong the final song of the night. I was right. He’d done it before in New York, jumping down off the stage to play amid the crowd. Maybe it’s age and experience, maybe it’s better security, he played from the stage this time. It was no less poignant. “Everlong” was one of the Foos first hits, and Grohl credits the song with the longevity of the Foo Fighters, and much of its DNA.

For me, fifteen years after that New York show, the answer was a resounding yes. 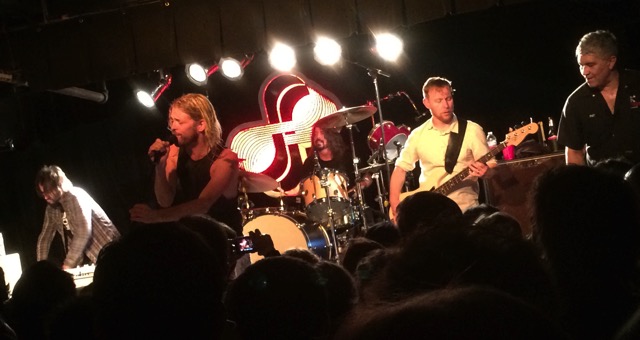 Speaking of DC Punk history, tonight, at The Passenger, Brian Baker (Bad Religion, Dag Nasty, Minor Threat), Brendan Canty (Deathfix, Fugazi, Rites of Spring) and John Davis (Title Tracks, Q and not U) are holding an event at The Passenger and Warehouse Theater, with DJ sets from each, to help build the DC Punk Archives. Admission is $5, or a piece of DC Punk Scene to be donated to the event (posters, records, zines, flyers, set lists, t-shirts, that sort of thing), and there will be cocktails from Tom and Derek Brown.

One thought on “We Love Music: Sonic Highways”