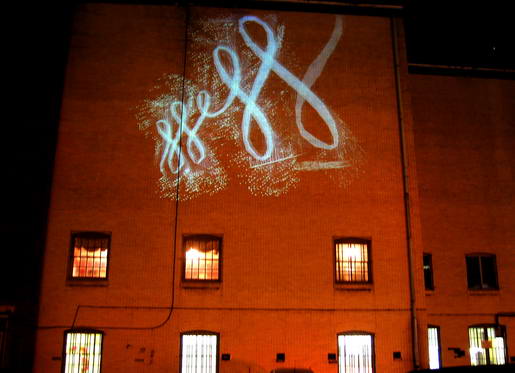 On Thursday evening I went to the post-opening event for the WPA/C Street Art exhibit in Georgetown. After a brief bit of confusion (tip for organizers: if the event is outside and behind the building then some mention of that would be helpful) and impromptu street theatre by the DC police I made it around the corner to see the projection.

I did eventually find the event and let me tell you – no matter how you feel about tagging, seeing it happen with the strokes four stories high is impressive. Don’t worry antiBorfs – this is non-permanent, projection art. The creator of this project is fi5e, otherwise known as Evan Roth, an R&D fellow at the Eyebeam Art & Technology Center. Eyebeam’s focus is on where art and technology meet, and looking through their website is a walk through the greatest hits of the “oh neat!” things that pop up all over the web. The very front page of fi5e’s website includes a video about the making and deploying of several hundred LED ‘throwies,’ something that bOINGbOING readers would have seen mid-February and his NWA “explicit content only” project was highlighted there in early 2005.

Evan was kind enough to talk to me for about twenty minutes, and here’s what I saw and learned. 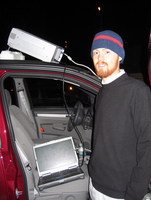 The Graffiti Analysis project itself isn’t exclusively shown at forty foot heights, but this isn’t the first time Evan has taken it out to show that way. I asked him if he ever just set up somewhere for shits and giggles and he told me “This is actually the first time I’ve done it with permission; usually I just cruise around and find spots I think are cool.” If any of you find yourself in NYC you might want to keep your eye out for him. He’s hard to miss when he’s doing this; his setup is in a SUV-type vehicle with the laptop, inverters and a car battery in the passenger seat and the projector set up on the roof. If you drove next to the Corcoran Wednesday night you saw the project spread across several buildings.

What you’d have seen Thursday evening is just a slightly slicker and much larger version of what you can see at the old Staples location where the exhibit is going on through March 26th.[PDF] The interface is a little different, but the meat of the visuals is the same. As you watch, the work of one of four taggers unfolds on the screen. Making this happen took the help of the four taggers and bit of clever technology. “What this is doing – this is just straight video capture, and on this pen is a light source. They’re writing on a piece of plexiglass. And on the other side of the plex is a camera connected to my computer. That camera is just looking at that little circle of light. And that’s how all this data is being generated. So, this is actually ink, it’s just a motion capture device. So that’s what the software does.” 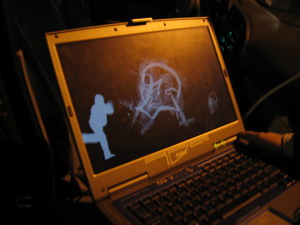 Or that’s what it does in the capture phase. In the results phase the really interesting aspect isn’t just watching the writing happen, it that it’s got depth. As the tag unfolds, the back of the image is where it started and it moves ‘up’ as time progresses. If you spin partly around to the side you can see it grow out as well as up and down and side to side. It’s much more simple than it sounds and about ten times cooler. Evan’s website has a demo video but you’re going to want to be the one driving, which you can at the exhibit. “Its stacking on top of itself so that when you move around it… time is moving linearly always, so as you move through it you can see how it stacks up on top of itself… The gallery version I see almost as sculpture; it’s an animated sculpture that you can move around and view.”

Four sets of tags makes for a good amount of viewing, but Evan originally called out for more. Before this project he hadn’t had any contact with the graffiti community. Not wanting to work on capturing the efforts of some inexperienced scribbler, he put twenty-five pictures of work from taggers he admired up on his website with what a conference organizer would term a “call for participation” and they came to him. Although these captures were done on plexiglass with actual pens, Graffiti Analysis supports input from a tablet and could do its magic on the fly, out on the street at one of Evan’s impromptu street corner exhibits. None of the taggers has come out for that, though. “They wouldn’t be doing anything illegal, obviously, since it’s just projected on a wall. But the problem is there’s the possibility someone would recognize the work and connect them with it.”

We didn’t discuss what comes next for Graffiti Analysis, but it doesn’t seem like this will be the end of the evolution of this application. After all, loftier goals started the process. “The basic idea of the project – My background is in new media arts, so I wanted to extend that to the graffiti community… the culture of graffiti in New York – which is soft of my interest. I wanted to write some software to be used by graffiti writers.” Perhaps a revision of Graffiti Analysis could find its way into a youth center where it could accept new tags and cycle through projecting them. Could magnitude be enough to offset a loss of permanence? Or something as simile as a collection of tags from down the ages for those nostalgic for an earlier time.