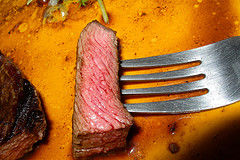 DCFoodies reported on Saturday that Ray’s the Steaks has re-opened! As a considerate reporter (and not at all motivated to make sure there was a seat for me) I waited until I could go and verify this myself yesterday. Sure enough, Ray’s is open for business at 6pm every Tuesday through Saturday with a new no-reservation policy. Show up, smile and be seated as soon as there’s a spot.

This was my first Ray’s visit and I was not disappointed.

This post appeared in its original form at DC Metblogs
We were seated promptly, no doubt due to the combination of a Tuesday night and people still figuring out that they had re-opened after their week sabbatical. We heard Michael talking to another couple about the reason for the closing but couldn’t quite make it out. I considered flagging him and asking myself, but quite frankly I don’t much care. He’s notorious for being a little cranky and quite frankly I find it charming, given that he seems to be quite amiable in demeanor and only difficult about people being difficult with him. A clear sign of this is, well, a sign. Posted at the greeting station is a framed 8&1/2 by 11 piece of paper with a printed message that welcomes you to Ray’s and also states in simple terms that the staff is his family and he expects you to treat his family with respect, just as you would expect yours to be in your own home.

All that said, the only time I saw him without a smile on his face was when he was wearing one of concentration. My darling girlfriend and I had been fortunate enough to be seated in the back row of tables and my seat faced into the open kitchen. Being put by the kitchen door is a cliche joke in a sitcom, but in an open kitchen design it’s one of my favorite spots in the house. I got to watch the goings-on at the grill and the warming station where the excellent mashed potatoes and creamed spinach are spooned onto cast-iron serving dishes and I was amazed at the staff’s rhythm – not once did I see a backup at either place.

We started out with a cup of the crab bisque and the green salad and alternated snatching bites from each other. The bisque was as excellent as advertised, though I was less impressed by that than the salad and it’s superb vinaigrette. It’s hard to make something taste bad when you’re free to but a ton of butter in it, but this dressing was a fantastic blend with just the right amount of oil and a perfect tang. Over a simple mix of greens and a half-dozen cherry tomatoes, it was a winner. Not to pay short shrift to the bisque – it was similarly fantastic, and ranks neck and neck with the other best bisque I have ever had, Joe’s Stone Crab’s lobster bisque.

For our main courses I had the cut with the mushroom sauce and DG had the New York strip. Both were fantastic and wonderfully grilled and easily equal to the caliber of what I’ve had at Ruth’s Chris. The amount of crumbled blue cheese on mine was way more than I needed, however it was no challenge to knock off what I didn’t want and only consume the quantity I felt it needed, which was very little. Although Jason thought the blue cheese masked the flavor of the steak and preferred it left off, I liked it as an optional accent. Some bites I had it, others I left off.

Both of us stopped at the halfway point and opted to box up the remainder. Not only were the portions prodigious but we’d seen the deserts going by us all night and were determined to leave room. Our gracious server took off the plates and promised to return momentarily. Darling girlfriend commented that she was pleased the spinach and potatoes had gone as well since she hoped they’d include those in the box.

An aside here – in point of fact, she hoped they’d include the spinach in HER takeaway box so you can see where her priorities were in this matter.

From my vantage point I was able to tell her that, no, in fact they weren’t putting those sides in the boxes… they were doling in some fresh portions. Kudos, Ray’s! I’ll be enjoying all of it in an hour or so for lunch.

Come desert time our server rattled off the options and I went with the Key Lime pie I’d seen go by me several times. DG picked the dark chocolate mousse. As our server walked off I asked if she’d heard the other two mousse flavors that our server had listed and she replied “Who cares? Dark chocolate!” Her enthusiasm was well-rewarded – the mousse was excellent. A good initial taste which you might not realize was a dark chocolate, till the barely bitter, full flavor released on your tongue. The Key Lime was similarly tasty with a tartness that you noticed as the taste settled on your tongue, not initially. The graham cracker crust was perfect and the strawberries it was served with – as the mousse was – were divine.

Once it was all said and done our server brought us two tiny espresso cups filled with hot chocolate to finish off the evening, on the house. Final tally, $102 including tip, darling girlfriend’s glass of wine and my beer. Not the cheapest evening we’ve ever had out but reasonable for a top-quality steak. And, as I said, today’s lunch as well.

When you go (which you should) don’t even bother trying to park in the lot in front. It’s too small and a massive pain in the ass. Park down the street and walk. You’ll want the brief exercise afterwards anyway.