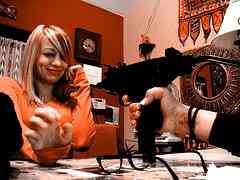 Today’s Wall Street Journal has an article on the rising pressure that consumers are feeling from merchants to use their pin code when making a purchase and how that pressure is likely to continue to rise[subscription required]. The reason is simple: their fees when you purchase something and use a PIN code are lower than when you do what they call “a signature transaction.”

For example, according to Visa USA Inc., the country’s largest card network, a typical supermarket pays 24 cents in fees when a customer buys $40 of groceries with a debit card and a PIN. The fee rises to 35 cents for a signature-debit transaction and can be more than 50 cents when a customer uses a plain-vanilla credit card.

The fees go mostly to the banks issuing cards and to other companies that process the transactions. The banks, in turn, pay fees to Visa and MasterCard Inc. The costs borne by the merchant depend on myriad factors, including size, business and the type of card. Some fees are flat while others are a percentage of the transaction amount.

What the hell does that have to do with the price of tea in China life in DC? Simple.

This post appeared in its original form at DC Metblogs
We’re home to Chevy Chase bank, who WaPo reported last year has the highest non-customer ATM fees in the country among other banks their size. Only one bank of any size charges more, a small company in Pittsburgh. But that just dings those of us who aren’t their customers. Their own customers can get their cash to spend for free… so long as they get it from the ATM rather than spend it via a PIN transaction at the grocery.

Use a PIN there and you’re going to be paying $0.25 for the privilege, at least with some accounts. I can’t tell you if it’s on all of them or just the one where I have witnessed it: they don’t have their customer agreement anywhere on their website that I can find. I’m betting they’re in the “Personal Account Rules & Regulations” that don’t seem to exist online, which is kinda funny since you can download, print and sign their customer agreement [pdf] for opening a new account. By signing you indicate “I (we) acknowledge that I (we) have received the Personal Account Rules & Regulations.” A neat trick since they won’t show it to you. Googling chevy chase bank and fee schedule also yields nothing. Any of you have a fee schedule so we can verify which account pay it and which (if any) don’t?

The interesting thing is that you might be using that Chevy Chase debit card at Giant, where there’s a good chance you are checking out no more than 100 feet from an in-store branch. If you’ve checked out and pressed “CREDIT” on the swipe pad or self-check screen when time came to pay then you’ve experienced “steering,” the other subject of the WSJ article. That’s the nice name for the confusing behavior when, even thought you picked CREDIT, the pad asks you for a PIN rather than a signature. Wal-Mart has the courtesy to show a button that says CREDIT for you to pick and bypass the request but Giant, Harris Teeter and CVS make you press either enter or – confusingly – cancel in order to continue your checkout.

If you thought it was just accidental goofyness or poor programming by some *ahem* chump software engineer, think again.

PIN-based debit “is always the first option that we present to customers,” says Mike D’Angelis, a spokesman for CVS, which operates about 6,200 drugstores in 43 states, and has been steering customers for about six years.

Personally I find it annoying to be steered when it comes after I’ve explicitly picked CREDIT, but those of you continuing to do business with Chevy Chase may find it expensive on top of that. If you deny your bank that $0.09 difference between your PIN and signature transaction in the above WSJ example then they turn the loss into a win by dinging you for three times that amount.

Expect the squeeze to get even harder as banks like Chevy Chase pull & charge us on one side and merchants pull on the other. Guess who plays the part of the rope?