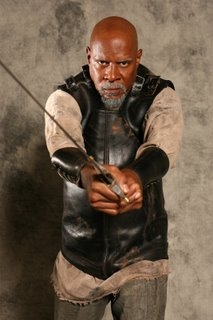 Well here’s something I didn’t think I’d ever find myself saying. Peter Marks is far more generous in his remarks than I.

Not to say he isn’t right, and not that there aren’t a few things that I was more impressed by than him. But to lead with the negative, I’m flat-out astonished that the limit of his remarks on Avery Brooks’ performance amount to commenting on his excellent voice – “sonorous basso” and “honeyed tongue,” and “The role is huge, speech-packed and positively exhausting; that he gets through it at all is an achievement.” I’m reminded of the old quote, “It’s not amazing how well the bear dances, but that he dances at all.” The fact that Brooks gets through the role is about the extent of his achievement in Tamburlaine. Well, that and putting teeth marks on every piece of scenery in the place. I was starting to worry I’d be next to be chewed on – and I was up in the balcony.

This post appeared in its original form at DC Metblogs
I might not have minded this in different circumstances – Tamburlaine is supposed to be a big figure, someone who conquers near and far seemingly based just on force of will. However I imagined myself as his director saying “Avery, look, love ya babe but you’re dialed up at about 13 and we need you at about 9.” Most everyone else was around 7. So rather than seeming like a powerful figure overwhelming those around him with his passion it seems more like a very long episode of A Man Called Ham.

The end problem in the production ends up being that with Brooks so far out of step with everyone else it’s hard to understand the why of much of anything else that happens. We don’t get any feeling why Tamburlaine has set out on this quest, something that I personally was willing to blame on Marlowe but an actor friend of mine hangs firmly around Brooks’ neck. “It’s HIS job as that character to make it happen. If you have a REASON to say your lines, even someone who doesn’t understand the language can understand what is happening.” Agree with that or not, the split between him and the other actors leaves those interpersonal relationships perplexing. Why, exactly, does Zenocrate fall for him? When does he become so besotted with her as a person rather than a possession or spoil of war? This is a challenging work to enjoy – Marks says “If one of the Shakespeare Theatre Company’s missions in its new home is to test audiences’ tolerance for the difficult, the first exam turns out to be a doozy” – but there’s the brief whiff of a love story here that might have been touching and interesting. Too bad it’s a fleeting sniff that doesn’t appear till the end of part one and departs halfway into part two.

On the complete opposite side of the enjoyment spectrum, visually and aurally Tamburlaine is a joy. The set dressing is pretty minimal, excepting four huge vertical drums that are used in conjunction with recorded drumbeats, making for a deep and resonate sound throughout the space. What the stage omits in static sets it makes up for with carts and beds, rolled in from the sides or raised up through a stage trapdoor. Interesting lighting effects happen via other open smaller traps, though they did distract me on a few occasions with the thought “is he going to fall and break a hip in that hole? Does he see it?”

The only visual misstep that the production makes in my opinion is this: Just prior to intermission there’s a scene with no lines where the boy Callapine is put into the mobile cage where Tamburlaine had been holding his parents, Bajazeth and Zabina. We come into part two with the grown Callapine in the same cage, implying he’s been a prisoner of Tamburlaine all those years into adulthood. Except that wouldn’t make any sense, as he’s got a scheme to escape and contacts on the outside. Contacts that he made… at age 12, from inside a jail? There’s nothing in the Project Guttenberg text of Tamburlaine to support this bit of staging and I found it a little jarring.

All in all, this made for an interesting introduction to the stunning Harman space – I have some pictures of the beautiful glowing glass lobby that I’ll share with you later – but I wouldn’t suggest Tamburlaine to anyone who isn’t interested in the work academically.