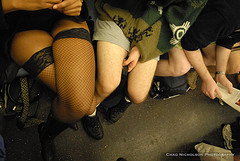 Tired of seeing fares go up and up? Want to strip down to your skivvies to protest? Well, this Saturday might be just your chance. You could join the 204 confirmed Facebook attendees for a Pantsless Metro Ride. So, DCist blew the “cover” (it’s not a cover if it’s public on Facebook, dudes. It’s like Twittering about it. It’s not even remotely private.), and the Express talked to the Metro people about it, who threatened to get people arrested for disorderly conduct or indecent exposure.

Courtesy of DCist commenter keb points out the regulations for DC:

DC Statute Â§ 22-1312. Lewd, indecent, or obscene acts.
(a) It shall not be lawful for any person or persons to make any obscene or indecent exposure of his or her person, or to make any lewd, obscene, or indecent sexual proposal in the District of Columbia under penalty of not more than $300 fine, or imprisonment of not more than 90 days, or both, for each and every such offense.

Â§ 22-1321. Disorderly conduct.
Whoever, with intent to provoke a breach of the peace, or under circumstances such that a breach of the peace may be occasioned thereby: (1) acts in such a manner as to annoy, disturb, interfere with, obstruct, or be offensive to others; (2) congregates with others on a public street and refuses to move on when ordered by the police; (3) shouts or makes a noise either outside or inside a building during the nighttime to the annoyance or disturbance of any considerable number of persons; (4) interferes with any person in any place by jostling against such person or unnecessarily crowding such person or by placing a hand in the proximity of such person’s pocketbook, or handbag; or (5) causes a disturbance in any streetcar, railroad car, omnibus, or other public conveyance, by running through it, climbing through windows or upon the seats, or otherwise annoying passengers or employees, shall be fined not more than $250 or imprisoned not more than 90 days, or both.

Even still, if you end up getting booked for it, don’t worry, you probably won’t end up on the sex offender registry in the District. MD and VA are probably also safe, provided, again, you’re not being a jackass.

Sounds like you’re pretty well safe in DC, SO LONG AS YOU WEAR UNDERWEAR. Don’t let your hoo-ha or schlong hang out and you should be just fine, so long as you aren’t being provocative or a jackass. So ride in silence, you brave souls, and you should be fine. Please be reminded I am not now, nor ever have I been, a lawyer. If you want to read the regs for MD or VA, they’re contained in the extended entry.

This post appeared in its original form at DC Metblogs
Here are the Regs for Arlington, the regs for Virginia should read close this:

(a) It shall be unlawful for any person to intentionally make an obscene display or exposure of his person, or the private parts thereof, in any public place, or in any place where others are present, or to procure another to so expose himself.

(b) Any person convicted of such indecent exposure shall be guilty of a Class 1 misdemeanor.

(a) A person is guilty of disorderly conduct if, with the predominant intent to cause inconvenience, annoyance or alarm to one (1) or more other persons, or recklessly to create a risk thereof, he engages in conduct, including the utterance or display of any threatening, abusive or insulting language, which, with respect to the person or persons at whom, individually, such conduct or language is directed, has a direct tendency to cause:

(1) Acts of violence by such person or persons; or

(2) Fear by such person or persons of an unpermitted touching of them or personal injury to them; or

(3) Personal injury to such person or persons, or an unpermitted touching of them; or

(b) A person is guilty of disorderly conduct if, wilfully, or being intoxicated, whether wilfully or not, he disrupts any meeting of the Arlington County Board of the Arlington School Board, or of any committee, board or commission appointed in whole or in part by either of them, or of employees of Arlington County or the Arlington School Board, convened to conduct public business, or any meeting of a school, literary society or religious group, if such disruption prevents or interferes with the orderly conduct of such meeting.

(c) A person in charge of any such public property, private property while open to the public, public
conveyance or meeting may eject therefrom any person whom he has probable cause to believe has committed any such disorderly conduct, with the aid, if necessary, of any persons who may be called upon for such purpose.

Here are the Regs for Maryland:

MD Code, Criminal Law,Â§ 10-201. Disturbing the public peace and disorderly conduct
Definitions
(a)(1) In this section the following words have the meanings indicated.
(2)(i) “Public conveyance” means a conveyance to which the public or a portion of the public has access to and a right to use for transportation.
(ii) “Public conveyance” includes an airplane, vessel, bus, railway car, school vehicle, and subway car.
(3)(i) “Public place” means a place to which the public or a portion of the public has access and a right to resort for business, dwelling, entertainment, or other lawful purpose.
(ii) “Public place” includes:
1. a restaurant, shop, shopping center, store, tavern, or other place of business;
2. a public building;
3. a public parking lot;
4. a public street, sidewalk, or right-of-way;
5. a public park or other public grounds;
6. the common areas of a building containing four or more separate dwelling units, including a corridor, elevator, lobby, and stairwell;
7. a hotel or motel;
8. a place used for public resort or amusement, including an amusement park, golf course, race track, sports arena, swimming pool, and theater;
9. an institution of elementary, secondary, or higher education;
10. a place of public worship;
11. a place or building used for entering or exiting a public conveyance, including an airport terminal, bus station, dock, railway station, subway station, and wharf; and
12. the parking areas, sidewalks, and other grounds and structures that are part of a public place.
Construction of section
(b) For purposes of a prosecution under this section, a public conveyance or a public place need not be devoted solely to public use.
Prohibited
(c)(1) A person may not willfully and without lawful purpose obstruct or hinder the free passage of another in a public place or on a public conveyance.
(2) A person may not willfully act in a disorderly manner that disturbs the public peace.
(3) A person may not willfully fail to obey a reasonable and lawful order that a law enforcement officer makes to prevent a disturbance to the public peace.
(4) A person who enters the land or premises of another, whether an owner or lessee, or a beach adjacent to residential riparian property, may not willfully:
(i) disturb the peace of persons on the land, premises, or beach by making an unreasonably loud noise; or
(ii) act in a disorderly manner.
(5) A person from any location may not, by making an unreasonably loud noise, willfully disturb the peace of another:
(i) on the other’s land or premises;
(ii) in a public place; or
(iii) on a public conveyance.
(6) In Worcester County, a person may not build a bonfire or allow a bonfire to burn on a beach or other property between 1 a.m. and 5 a.m.
Penalty
(d) A person who violates this section is guilty of a misdemeanor and on conviction is subject to imprisonment not exceeding 60 days or a fine not exceeding $500 or both