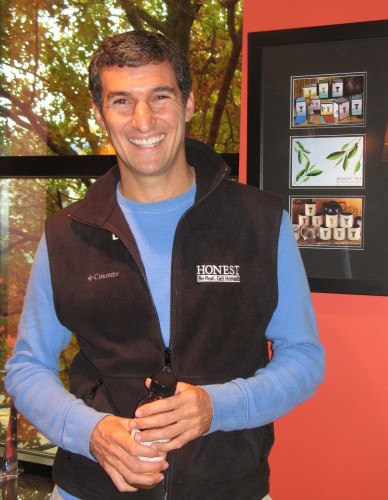 There’s a lot of openness around community. I’m from Boston originally. It feels like DC doesn’t have the same kind of ethnic neighborhoods, but you don’t have the feeling of being closed off. In DC, whether you’ve been here for a year, or five years, or 10 years, it feels very easy to connect to the community.

For us, it’s been a great place to raise our kids. The schools are good, there are lots of good activities for them to be involved with, and my oldest son loves going down to the Potomac. It’s nice for him to have nature close by.

For doing business, it’s very convenient to have so many airports nearby. We’re accessible.

You mentioned you had gone for a run this morning. Do you run a lot?

Yes, I run on the Capital Crescent Trail. It’s physically healthy, but psychologically healthy for me to be able to get those breaks. I do a lot of recovery thinking out there.

Where does a TeaEO most like to eat and drink in DC?

The sweetgreen downstairs gets a lot of business. Between it and the Organic to Go across the street, we’ve got a good setup.

With three boys, it’s usually family food versus fine food. We’re vegetarians, which also makes it a little challenging. I appreciate that there are more places that have real vegetarian offerings, as opposed to just pasta. We like Redwood Restaurant too.

You said before that you enjoy the green spaces in the DC area. Are there particular ones that stand out to you?

You’ve certainly got the Mall, and then the paths. My son and I bike from the house to National Airport sometimes to see the planes take off.

This year, we went down to the Potomac during the shad run, and the water was dark with fish swimming upstream. It’s just amazing to see. You don’t think about that kind of life going on in this river.

Well, I assume freshwater lakes are something I’m probably not going to get.

So the other thing of course is traffic. When I was living in Arlington before I went to business school, I was working in Baltimore. We had just had our first son at the time. I was spending so much time in the car, and this was my first child’s first year of life. I would get up early or try to get home before he went to bed, but seeing him was on the margins. And that’s not a good way to live.

Now, I have a short commute. Almost every day I bike to work. For me, it’s such a pleasure to bike. I don’t have to deal with parking or traffic.

We need to develop more capability for centered growth — more bike trails, more public transit. We need to rethink it in a dramatic way. It’s not just oh, let’s get a few more bike racks. At Bethesda Green, I said, “Let’s get 1,000 bike racks.” That seems like a lot right now, but when they built the Beltway, they said they’d never fill up all those lanes.

And of course I would change the name of the Redskins.

You’ve started a business here with a sustainable focus and co-founded Bethesda Green. How receptive do you find DC to the idea of protecting the planet?

Bethesda in particular has been very receptive. Bethesda Green got traction very quickly. At the first launch meeting in February 2008, we thought we’d get 35 people, and we had over 300. It’s clearly resonating, and we’re getting great engagement in the community.

With Bethesda Green, one of the best things we’re offering is the chance for people to act on things they care about. It’s a very small organization; by design, it’s a local nonprofit. What it hopefully will do is have a big impact and have a big base of people involved.

The whole private/public partnership really works. We’re very fortunate to have not just a receptive population, but a receptive government and infrastructure.

Where do you think the local green community is headed in the next few years?

At Bethesda Green, we’re evolving. The Green Incubator was not in our founding idea. But when Chevy Chase Bank/Capital One said they wanted to donate office space, that created an immediate opportunity for the incubator. We rented out the space and created a base of income for the nonprofit, and we have this wonderful chance to support the emergence of a green economy.

Honest Tea shows up at a lot of local events. While regional and national stores carried it first, is it still easier to find here, or now distributed more evenly throughout the country?

Over the past few days, I’ve been talking with our West Coast Coca-Cola distributor about getting into most of the mainstream grocery stores. We are now in the Northeast with a Coca-Cola distribution network, and we’re national with natural food stores. We just got into Wegman’s, and Target with Honest Kids. We’re going to see some impressive growth next year. It’s nice for us that we’re still really a unique offering.

If this isn’t like asking you to choose among your children, what’s your favorite flavor of Honest Tea?

I have to admit, I’ve really become a fan of this new line of Honest Kombucha. I can’t say that I like it because it tastes better than our others, but it’s a very different product. It’s a new opportunity for us.

One thought on “He Loves DC: Seth Goldman”