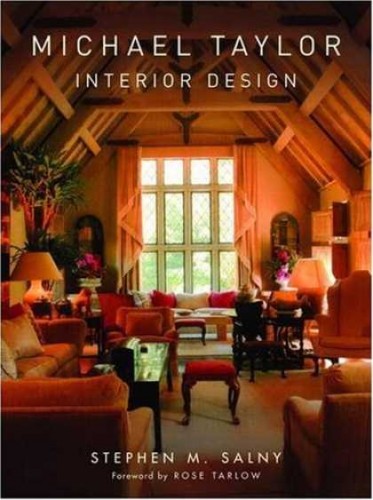 Last night at the Corcoran, author and design expert Stephen Salny provided a comprehensive look into the legendary designer Michael Taylor.  One of Architectural Digest’s “20 Greatest Designers of All Time” and best known for his popularization of the “California Look”, Taylor continues to revolutionize the industry 25 years since his passing.

I had the unique opportunity to chat with Salny about his book Michael Taylor Interior Design.

We Love DC: What do you think made Michael Taylor so unique among the slew of other significant designers during his era?

Stephen Salny: Michael broke most of the rules of traditional design that preceded him. Michael was the first to bring organic elements from the outdoors in, believing that people on the west coast – who lived differently due to the warmer climate – should be living as though they were outside even though they were indoors.  Carrying trees and plants into the home was not a common practice of the 1940’s and 1950’s interior, but Michael changed all of that.  Things that today seem like common practice in the home but back then were unheard of, such as a large straw basket adorning a table, can also be credited to Michael’s brilliance.

Michael was known for using white throughout his interiors which was in stark contrast to the more dark and traditional rooms of that time.  He liked using white, not a white-white but a beige-white, as a springboard for whatever color he brought into the room – and his rooms did have quite a lot of color in them. Michael felt that the color would radiate and bounce more easily off the blank ‘white’ canvas, making the color in a way more potent and present.

Michael was also not afraid of scale; he loved to push the envelope.  He made small rooms seem physically larger by bringing in elements that were ‘best suited’ for a larger square footage.  Michael also had a way of making the most mundane things more precious, placing items such as a bamboo table from Cost Plus next to a precious antique. Thus, making the antique seemingly less precious while providing the ordinary furnishing with an essence of extravagance.

WLDC: How would you describe the “California Look” that Michael Taylor pioneered and has since been most remebered by?

SS: The “California Look” to me would best be described as having little or no separation between the outdoors and the in.  Michael wanted you to feel as though you lived outside, inside your home.  Although Michael’s look was originally strictly regional, he quickly became a national phenomenon.  He was considered a celebrity and revolutionary of design – although he is most synonymous with the state of California, his reputation was international and well-beyond the design community.

WLDC: Michael Taylor had little formal training.  What character traits made him so successful?

SS: 99 % of Michael’s success was inherent.  Michael was daring and bold in an industry where not everyone felt comfortable to push the envelope.  He wasn’t afraid of anything.  Dealing with Michael was like preparing for an earthquake – his abilities came from within this ‘I shall not fear’ personality.  This is not something that can be taught. Michael was also exposed to beautiful things at a very young age.  His grandmother stressed the importance of finding beauty in everything, from a rusted fender in a junkyard to a precious antique; nothing was to be viewed as ugly.  As a result, Michael developed an inherent ability to select the best of anything that he was looking at. He could stand at the entrance to a store and select the best pieces without ever having to walk through the front door.

WLDC: What project was most pivotal in pushing Michael Taylor into the spotlight? What project do you feel most embodied the designer?

SS: I think that one of Michael’s greatest commissions was the Beyer residence in Malibu that took almost 13 years to complete.  Michael had his hand in every aspect of that project.  With all of the glass and tons of boulders, this home truly epitomized his “California Look” and was the most venerated for its architecture (created by the famous John Lautner) and interior brilliance among national and international publications.  Most people thought that Michael did not like to do traditional rooms because these were the interiors that did not ‘revolutionize’ the industry – or at least were not as prominently photographed and displayed by the media.  However, Michael truly loved his traditional projects.

WLDC: How do you think Michael Taylor would succeed under the current trends and norms within the industry – such as a focus on sustainable efforts and the burden of economic restraint?

SS: Michael did not believe in a budget.  He spent his client’s money not because he intended to do so from the get go but because it provided him free creative reign – which often directly translated into lots and lots of money.  If clients could not provide him with this ‘monetary freedom’ of sorts than Michael would say something like, “we are not talking about money here, but we are talking about what I envision for your home and life”. Michael was bold and persuasive, his clients could not be weak – they had to ride the tidal wave with him or he wouldn’t take on their project.  Thankfully, his greatest patrons understood his brilliance as an artist during that time.