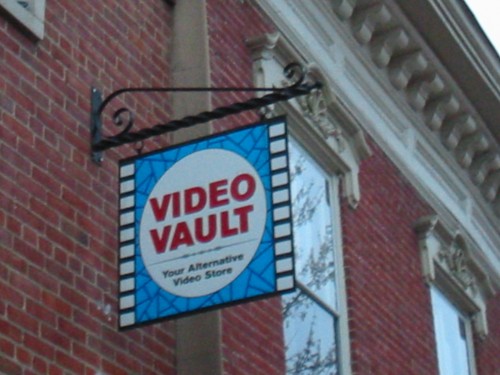 On April 30th the DC metropolitan area loses one of its truly unique businesses when Video Vault in Old Town closes the door on its astonishing collection of movie rental rarities for the last time. Like so many long-running, specialty businesses in the area, Video Vault has finally succumbed to the perfect storm of online competitors and the economic downturn. Add to that Video Vault’s main business being the renting of out-of-print movies on VHS in an age when VCRs are quickly becoming collectors’ items in their own right, and their closing seems almost inevitable.

Like so many of their incredibly rare movies, after April 30th, Video Vault will soon be impossible to find. For the next month however, Video Vault is still open, still renting, and is now selling off their inventory of thousands of ultra-rare movies. If you are a movie fan and have never experienced Video Vault, I highly encourage you to go before the store is gone. Browsing Video Vault is entertainment in itself. They feature specialty sections full of eye-catching oddities, themed displays that are movie-geek mana such as Extreme Asian Horror or the Blind Dead collection, and of course the infamous Cult room; a vault within the Vault that features the titillating and taboo, a wonderful tribute to shock and schlock cinema that is unlike anything DC will ever see again.

In the 1990’s Video Vault was an essential place for me. There was food, shelter, music, and Video Vault. I moved here in 1993 a young, developing film fanatic hungry to be exposed to everything the film world had to offer. Within a few visits I had exhausted the video stores near my GW dorm; dull places that mimicked the selection of the video stores back home. I felt I had seen just about everything of interest the traditional video store had to offer. One day I was lamenting this fact to Deb, the owner of Movie Madness (another extinct DC original; dedicated to selling movie one-sheets), and she suggested I should check out Video Vault in Old Town Alexandria.

Now at this time in my life anything that wasn’t Downtown might as well have been on another planet. I was new to DC, didn’t know the lay of the land at all, and had barely taken a metro ride. But the promise of some cool movies had me blindly jumping on the metro and taking the ride out to Old Town. I should also mention that the internet was in its infancy and GPS was the stuff of science-fiction. My plan was to get to Old Town and just ask people how to get to Video Vault. Which I did, only to make it to their Washington Street row house HQ** after they had closed for the night! So there I was; very disappointed, kind-of lost, and dreading the trek back to the metro stop. So you can excuse me if I decided to try to take a peek inside. I went to all the windows on the first floor and by the the light of the streetlamps managed to catch uncomfortable, tip-toed glimpses of the treasures inside. The first floor of Video Vault looked like some kind of shadowy lair inhabited by shelf after shelf of VHS tapes. The movie posters on the walls (some of my favorite movies), the strange video boxes facing outward, the hand-scrawled section tags promising HK Action!, Foreign War Films, & Mondo Cannibalism! made me feel like I was spying on a secret world of movie-geekdom. A secret world that I had to get a piece of! I spent the long walk and metro ride back to GW trying to imagine the strange film delights that I would be introduced to on my return trip.

I made it back to Video Vault a few weeks later and quickly began a weekly ritual of going out there every Monday and renting a stack of movies to watch during the week. My classmates at GW quickly caught on and a small group began to look forward to whatever bizarre, strange, violent, fringe movie I would bring back with me. Video Vault opened up worlds upon worlds of film to me. The clerks were always willing to chat with me about what was new and weird or to recommend a genre classic that I had to be introduced to. The film education I got at Video Vault was sort of like I was attending a second college. Their clerks were like my professors and each week I would watch a mix of fringe, foreign, and classic to become a truly well-versed movie geek.

Video Vault was the spot to rent the latest Hong Kong action import long before they became a Hollywood trend. The Vault was also where raging debates would occur over the merits of young Peter Jackson’s gore-humor, light-years before anyone could ever imagine he would move into mainstream Hollywood, let alone dominate it with the LOTR trilogy. Before DVD and the internet, Video Vault was the only place in DC, and in some cases the nation, where you could rent a lot of these movies (for many films they still are). Video Vault even rented their VHS tapes by mail; dispatching tapes across the country to hard-up film fans in search of that ultra-rare flick (take that, Netflix!).

Video Vault is where I first learned of edgy American classics such as “Electra Glide in Blue” or “Bring Me The Head of Alfredo Garcia“. It’s where I finally got my hands on copies of “Bullet In The Head” and “Accion Mutante“. And is where I was introduced to such extremes as the urban beauty of Luc Besson’s “Subway” and the splatter-gore insanity of “Riki-Oh: The Story of Ricky“. Video Vault and the movies I rented from them played an integral part in making me the film fan and the writer that I am today. For that I will always be grateful to this wonderful video store. Who knows how many other young kids Video Vault inspired with their odd-ball collection of the must-see and the obscure? I understand why Video Vault has to close but I am sorry to see them do it. I can’t guarantee that the spirit of Video Vault will live on in the imaginations of every person they ever rented to but I know it will in mine.

Stop by Video Vault before they close on April 30th to say goodbye or to see their awe-inspiring movie collection for your first or last time. As I mentioned earlier, their entire collection is for sale. I stopped by on Sunday and bought their copy of “Burning Paradise” because in 15 years they are the only brick and mortar store I have known to have one.

* This article’s title is a reference to the film “Requiem for a Heavyweight” which I first heard about at…you guessed it…Video Vault.

** Video Vault has had three different locations over the years.

3 thoughts on “Requiem for a Video Store*”