Which would you rather be – a god, a demon, or a monkey? In Constellation Theatre Company’s production of Indian epic The Ramayana, the answer is definitely a monkey. I haven’t seen actors having so much fun on stage in ages. At times, maybe too much fun. Mounting a multi-character multi-location multi-verse is daunting, and I admire director Allison Arkell Stockman for attacking something so challenging even larger companies might balk. Constellation’s mission is to produce “epic, ensemble theatre” with “heightened physicality” – and The Ramayana is definitely all that. When it wavers, it’s the fault of being too generous, of allowing too many focal points and not streamlining enough. But it’s still an enjoyable night out, playing now thru June 6 at Source Theater.

The Ramayana is one of two of the most beloved and sacred texts of India (the other, The Mahabharata, was also put to stage in Peter Brook’s famous version some twenty years ago, see the film sometime to get a taste of how fantastic that theatrical experience was). It details the trials of Lord Rama as he endures exile and the kidnapping of his wife Sita by the demon Ravana. Rama is the incarnation of Vishnu and represents the ideal king on earth, his wife Sita is the incarnation of Vishnu’s wife Lakshmi and therefore the ideal queenly wife. Actually, every character in The Ramayana is an archetype of the ideal way to behave – from loyal brother Lakshman to devoted monkey Hanuman.

With so many characters travelling through many worlds, it’s vital to have a backbone and here Stockman has picked the best – live music composed and performed by percussionist Tom Teasley. From playing the doumbek to scat singing, he pulls the audience along as a kind of musical narrator, and it’s easily the second most riveting performance of the evening, grounding time and place far more effectively than any set design.

The actors are clearly envigorated by Teasley’s musical support, and no where is that more obvious than with those delightfully crazy monkeys, highlighted by a stellar standout performance by Joe Brack. If Brack doesn’t get a Helen Hayes nomination for his work as Hanuman, there is no theatrical justice in this town.

Complete and fearless dedication to physical theater is a hallmark of Constellation’s style, and both the monkey and demon ensembles that Lord Rama encounters are perfect examples of their mission to push the envelope. There’s a fine line between going over the top and just chewing the scenery, and not all of the ensemble have mastered that discipline. But given time, they will.

Playwright Peter Oswald’s original English production some ten years ago was noted for a bit of controversy in the irreverent way it presented such a cultural treasure. But I’m not sure an American audience comes to it with the same expectations (so I would be fascinated to hear any feedback from those with a strong Indian cultural background). If anything, the portrayals of Rama and Sita are too reverent in this production. A bit more irreverence may have helped both Andreu Honeycutt and Heather Haney – enchanting and engaging actors that here seemed a bit lost and too remote in their quest to both embody the divine and make the audience care.

When the action drags, it’s almost always when the actors stumble into playing emotion rather than concentrating on getting what they want – a common problem with a young company. My sympathies were tipped towards others in the story making themselves more present, like the demon queen Mandodari, played with burning conflict by Misty Demory, or the long-suffering Lakshman, a noble Danny Gavigan. 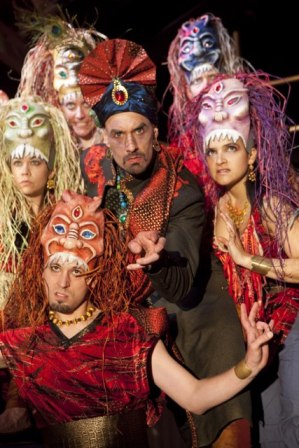 As Rama pursues his quest to rescue wife Sita, it’s really the characters he interacts with that gain our hearts, especially those monkeys. Brought to life as a true ensemble by Dylan Myers, Amy Quiggins, Katie Atkinson, Ashley Ivey, Andres Talero and Abby Wood, they instantly enliven the somber tone and remind us that epics can be, well, fun. Jason McCool amusingly bumbles through monkeyland as Jambavan, the king of the bears who inadvertently starts an animal vendetta, and Katie Atkinson steals hearts as constantly complaining monkey Nila. All are wonderfully costumed and masked by designer Kendra Rai, who also repeats the feat with the demon hoard and their multiple heads.

I always feel guilty singling out performances in what is really an ensemble piece, but as I mentioned before, Joe Brack as Hanuman needs to be recognized. Brack’s commitment to physical theater is unmatched and he is truly fearless about going over the top. He manages to combine both the physical and vocal characteristics of a primate with the exuberance of the discovery of the divine. It’s a courageous performance and should be the benchmark for the Constellation style.

Epic theater needs to be multi-cultural not just in its subject matter but in its casting as well, and though I understand Constellation is a small company with a core group of talented actors, frankly for a global epic I wished it could’ve involved more diversity. But that’s a quibble I have no idea if could be helped or not. What’s important is that this is an inexpensive night out with talented DC artists working to create something lasting in a brilliantly fun genre. It’s a company ending its tenth show with its third season, and I’m eager to watch them as they continue expanding.

8 thoughts on “We Love Arts: The Ramayana”