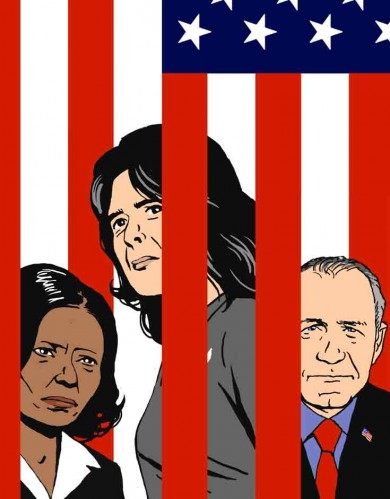 Theater J’s Something You Did is a perfectly serviceable little production of a little play that revolves around very little personal growth and revelations that aren’t very revelatory.

Update, 3:08p: If you’ve seen the play – or don’t intend to – and want the spoiler-ific version of this review, absent the deliberate efforts at avoiding revealing plot, you can check out my comment.

When City Paper wrote about Theater J subbing in this production for the original contender they quoted Artistic Director Ari Roth. He spoke about filling “a very particular slot – that of our High Holiday season-opener, hop-scotching the Days of Awe, a period of personal and collective reflection.”

Which makes it so odd that the one thing this play absolutely lacks is any hint of reflection from any of the characters.

There’s conflict aplenty, mind you, right from the get-go when Alison butts heads with a prison guard simultaneously with helping her write a letter. The letter is supposed to go to a traffic judge, begging forgiveness for a minor offense. It’s a nice little scene that you eventually find yourself wishing had been allowed to pay off.

“One must not put a loaded rifle on the stage if no one is thinking of firing it,” Anton Chekhov said. In Something You Did the rifle is Alison’s complete mastery of the words of contrition combined with a lack of any personal feeling for what they really mean, or at least any ability to feel that regret in any context other than her own.

It wouldn’t be so frustrating if Holtzman didn’t write several moments where Alison’s lack of true contrition and real goal – parole – wasn’t so directly telegraphed. On several occasions, when pressed, Deborah Hazlett’s Alison stumbles into admitting that her overriding aim is to get out of prison, period. We’re clearly meant to see that this class warrior has a lot more lip service and slogans than true empathy. So why don’t we ever see a moment where this hinders her, or any realization of the people beyond herself?

Instead we get a lot of people shouting past each other, action that doesn’t serve the talents of any of the cast. The two folks who do best in the production are Aakhu Freeman as Lenora, the child of the officer whose death was caused by Alison’s actions, and Lolita-Marie as Uneeq the prison guard. It’s no coincidence that these are the two people least called upon to speechify and therefor most able to connect with the other actors. It’s less noticeable for the male leads who get to be quippy, particularly Aronovic’s Arthur, since clearly both men are holding the world at arm’s length with their put-on personalities. Alison’s character, the core of the play, suffers most from the talking at when she should be talking with someone.

Truly perplexing is what turns out to be the ultimate conflict; a question of who will make what deal and whether someone will keep a confidence that isn’t earned. Who cares? We never see the results of one action and we have no real idea whether the other would have had any impact, making the matters moot.

There’s nothing wrong with Something You Did. At 90 minutes without an intermission it blows by quickly and delivers a number of moments of pathos and humor. Getting to spend time with the sneaky and curmudgeonly Arthur is almost reason enough to go by itself. It’s the frustrations of unrealized potential that takes away from the experience. By not committing to either being about the process or about the morals it ends up serving neither, and that’s a shame.

Something You Did runs at Theater J through October 3rd.

2 thoughts on “We Love Arts: Something You Did”