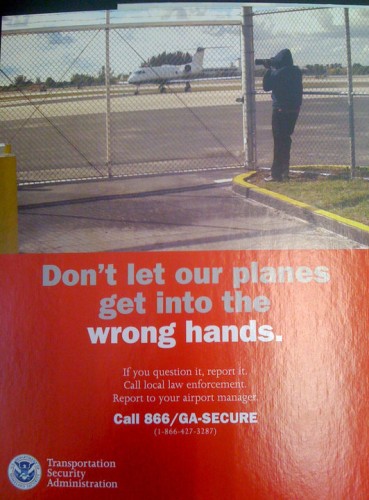 I like to take pictures. A lot of my friends like to take pictures. Sometimes, we even like to take pictures of things like airplanes. You might call us hobbyists, photo enthusiasts, or just photographers. But now, thanks to a new campaign from the Transportation Security Administration, there’s something else you can call us: terrorists. Yep, that’s right, gang, it’s time for another round of Security Theater Will Not Actually Make You Safer, starring the TSA and a bunch of scary, scary people armed with cameras.

The poster is actually part of a larger campaign encouraging airport employees “to be vigilant about general aviation security and report any unusual activities to TSA.” In the video accompanying the campaign (scroll down on the link above), its clear the scary photographer person is actually meant to be lurking outside a gate, and the message to airport employees is to make sure the gate is secure. In context, directed at small-airport employees, it makes sense. And the TSA, pioneers of behavioral detection analysis, certainly seems to a grasp of the fact that that in some instances, context is everything.

So what’s with this poster? Why would they strip it of all its context and send it around the country apparently ignorant of the message its sending? The TSA is playing into the irrational fears photographers deal with every day, especially here in DC, home to every kind of federal structure you can imagine and an army of private and federal officers guarding them. A security guard who has seen that poster is going to feel justified in pushing a photographer away from a federal building or a national landmark or National Airport or Gravelly Point, because his own government–his BOSS–is telling him to fear the photography threat.

After the poster made the rounds yesterday, drawing complaints from photographers, TSA quickly crafted a response in which they acknowledged the critics, saying, “Some felt this poster didn’t go far enough in distinguishing between general photography and suspicious surveillance activity.” No, TSA, it didn’t. Photographers especially know the power of an image, and the image in that poster made no distinction at all between general photography and suspicious surveillance activity. Maybe if he’d been wearing a pink hoodie instead?

There was a small ray of hope in the TSA blog post, though, when Blogger Bob made the point–argued by photographers all around this city and beyond–that “many photographers would be prime candidates to use such vigilance programs to report suspicious activity since they’re extremely observant of their surroundings.” That’s actually a really great point and one I’d like to see on a poster and hung in the break rooms of every federal building in this city. 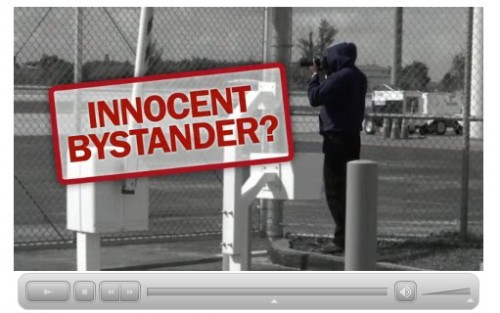 From the TSA security video

I cannot believe that we have to continually point this out to the people who are in charge of our national security, but here it goes again: there has not been a single documented instance in which a terrorist or someone accused of involvement in a terrorist plot surveilled a location with a camera before carrying out that plot. NONE. ZERO. You are making up this threat. To quote from Bruce Schneier, a security expert who wrote on the topic in 2008:

Below is a collection of photos taken at or near Gravelly Point, a favorite spot of athletes, picnickers and, yes, photographers, with a great view of the planes landing and taking off at National Airport. Next time you’re over there, make sure you’ve got the police on speed dial. Wouldn’t want anyone suspicious to get away, now would we? ‘Here for a moment’
courtesy of ‘karthikkito’ 18 thoughts on “TSA warns you to report photographers”