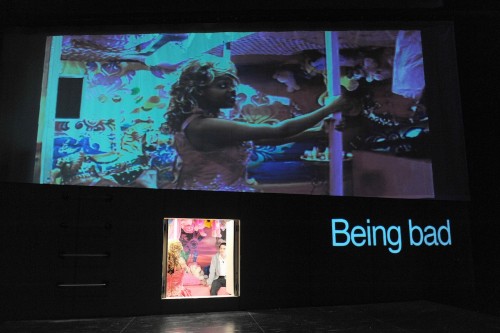 Woolly’s House of Gold succeeds spectacularly at creating a unique experience in the theater that couldn’t be replicated in another medium. Whether it succeeds in any other way is a difficult question.

I’ve spent much of the last year concerned about whether the theater experiences available to us really make use of the format. I won’t rehash the same issues I wrote about in August; I’ll simply say that House of Gold makes use of the space and stage design in a way that’s unique, compelling, and attention-grabbing. The action takes place on multiple physical levels and, at one point, uses live video and projection. Director Sarah Benson, set designer David Zinn and everyone else involved in putting this visual together deserves a pat on the back and perhaps an award or three.

House of Gold purports to be about murdered child pageant contestant JonBenet Ramsey and our society’s obsession with her. The Woolly team goes the full distance in selling this concept; the programs are fashioned as tabloid newspapers, the music playing till the second the lights go on and the action starts is a pumping mix evocative of a beauty contest. The opening scene establishes two people whose priority is performing and being heard first, everything else second. When the unnamed Man asks what’s in the breakfast sausage the Woman says “JonBenet Ramsey.” 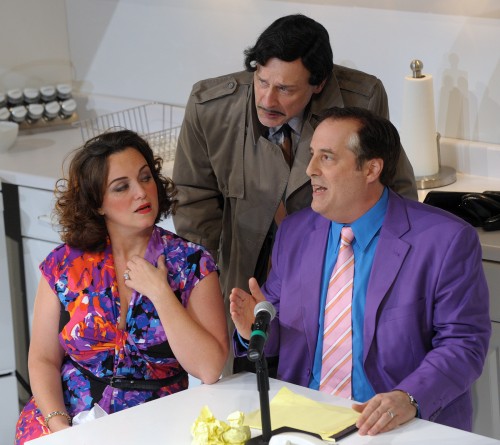 It’s about as subtle as a heart attack, but gets the point across pretty clearly: society craves JonBenet and doesn’t care how ground up and processed she is – just give us more details about that dead white girl, and hurry up.

Unfortunately the scene is performed by the same two actors who serve as JonBenet’s parents in the same costuming and setting as they’ll be in later. So it’s a shift to view them as other consumers rather than the directly involved people who lost a child. Is it worth it for that opening scene? I’m unsure. I know it took me out of the flow a bit.

Have no doubt: “flow” is the right word here. House of Gold is a production that intends to evoke feelings in you and create impressions. While there’s a more of less linear progression in the action it’s not meant to be an examination of the mystery of Ramsey’s death or an accurate representation of her life. Playwright Gregory Moss says so in one of the faux articles in the tabloid program but the casting of an African-American actress to play the little blond girl should tip you off even if you don’t read the interview. 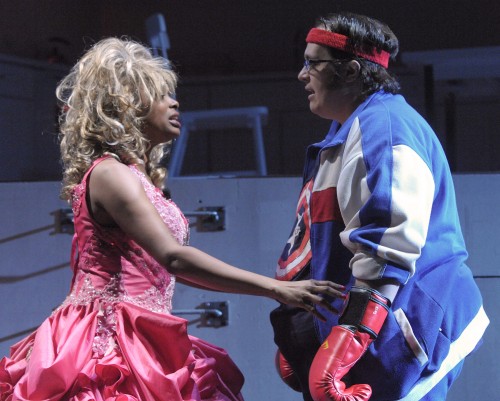 Moss claims he wanted to explore why Ramsey caught the public’s attention in a lasting way when so many other children haven’t. I’m not sure I got that sense from the play. Ramsey as a plaything for people both in life and death, however, came through well. It succeeds best when it’s being more subtle, letting the excellent Kaaron Briscoe as JonBenet interact with people who are more interested in her for how they can make them feel than as an actual person. Moss pulls out some more gasp-worthy insinuations of sexual abuse at other times and the production suffers for it.

I walked out of House of Gold strongly reminded of a musical group I’m fond of: Negativland, who are referred to as a “experimental music and sound collage band.” Perhaps a less contemporary comparison would be to say it was like a news story written by James Joyce on one of his more cogent days. However you choose to think of it, walk into House of Gold prepared to absorb something in an unusual way. It may very well be the anti-Oklahoma! in this sense.

House of Gold runs at Woolly Mammoth through November 28th.