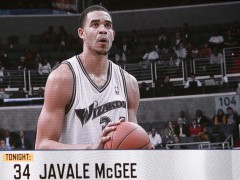 The last time the Sixers came into the Verizon Center the story was all about the top two picks in the 2010 draft facing head-to-head. Turner ended up playing 27 minutes off the bench while Wall started and scored 29 points the night.

Tonight the tables have turned, Turner ran out of the tunnel as a starter while Wall sat on the bench- active but still recovering from a left foot sprain. He entered the game in the first quarter to cheers but didn’t look like himself as he passed the ball around to shooters that put up bricks early in the game. The one thing that did stay the same for the Wizards this time around was the result: a Victory in overtime. Thanks to a game clinching shot by Nick Young and another strong performance from JaVale McGee, the Wiz eek out past the Sixers 116-114.

The Sixers dictated the game early, Elton Brand put up 11 points in the first quarter as the Wizards quickly fell into a 20-30 deficit at the end of the first quarter. Brand would put up 19 points before being ejected from the game after shoving an in-air dunking JaVale McGee to the ground.

McGee was the spark for the Wizards, who had a double-double going halfway into the second quarter. Coming off a 20-pt game in Detroit with a career best 16 rebounds, he set a new career high with 18 boards and scored 24 points. He’s shown some considerable improvement from the start of the season, tonight he was grabbing everything in his reach and finished many failed shot attempts.

In the second half the Wizards also turned to Nick Young who scored 19 points off the bench including a 3-pointer that caused the Arena to erupt with cheers. Soon John Wall got hot as well and the Wizards got to within four (73-77) entering the final quarter.

From there it became a shoot-out. With only 22.1 seconds left the Wizards were down 101-104 after two free throws from John Wall (25 Pts, 6 Ast, 3 Reb). Just when we were ready to write the Wizards off early in the game, here they were clawing their way back just as they did in the home opener.

John Wall hit three free throws in a row to tie game and send it into overtime after being fouled by Jrue  Holiday.

Even though Cartier Martin, the one who made the big shot in the home opener, was on the floor it was Young who clinched the game with a 3-pointer from the corner that put the Wizards on top. “It was my first game winner- I feel great right now,” was what he told me in the locker room after the game.

Once again the Wizards scratched their way to another home win (they have yet to win on the road) and even without John Wall at their best, others stepped up to come from behind and walk away victorious.

I talked with Nick Young about his winning shot:

I also got a moment to talk to JaVale and ask him about stepping up on offense and how he had the night he did with only one foul: