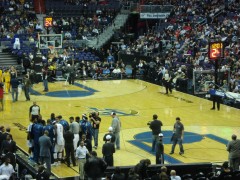 It maybe the holidays for many of us here in DC but for the Wizards it was all business as the team was close to full strength after a holiday road trip in Texas. After losses to San Antonio and Houston, the team remains win-less on the road perhaps a return to Chinatown to take on the Indianapolis Pacers would turn things around. The Pacers traveled to Washington, DC with a road losing streak of their own- a six game stretch without a road win.

Well it looked like the home cooking helped. With John Wall, Andray Blatche, and JaVale McGee back on the floor the Wizards topped the Pacers 104-90.

Wall was in his third game back after missing five with a bruised right knee. Blatche and McGee served a one-game suspension during Sunday’s game against the Spurs due to an altercation between the two outside a DC nightclub last Friday. Despite the return of a few players to the Verizon Center floor, the team was missing one key person last night: the coach. Due to a family emergency Coach Saunders was unable to run the game, leaving coaching duties to Assistant Coach Randy Wittman.

Wittman has experience as an NBA Head Coach with stints with the Cleveland Cavaliers from 1999-2001 and the Minnesota Timberwolves in 2007-2008. However he does not miss being the head honcho and he was quick to say that he doesn’t want to do it again.

” I don’t want to be [head coach] tomorrow…I know what my job is,”  he said the post game press conference, ” I’m ready to move back to the seat to the right as quickly as I can.”

Without Saunders, Wittman stuck to the prepared game plan and it worked, with six Wizards scoring double digit points in the 14-point victory.

The game started off as a close battle of two different offensive styles. The Pacers demonstrated hustle around the rim and a fearlessness to attack the ball in the paint. The Wizards were hesitant around the box, preferring to take outside shots. Even though the Pacers out shot the Wizards 41.2% to 39.8%, Indy lost in the turnover and free throw battle and that made all the difference.

Despite starting the game with a full deck, depth became an issue once again became an issue when Kurt Hinrich left the game with a bruised left thigh. With Lester Hudson left inactive for the game, John Wall was asked to play more minutes off the bench than the team would of liked. Not completely in game shape yet, he suffered from cramping and had to work on a stationary bike while taking breaks on the sideline.

“I had to tough it out, the coach told me I had a minute or two to get it together, they needed me back on the court, ” Wall said after the game.

The Wizards fought long and hard but ultimately walked away with the win despite some challenges along the way. The team now travels to Indianapolis for a re-match on Friday afternoon. Can the team take their victory last night and repeat for their first road win of the season? Perhaps the Wiz can get in the road win column before 2011 comes around.

One thought on “Wizards Top Pacers Without Coach”