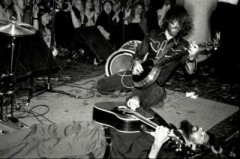 Photo courtesy of the Avett Brothers

Straight from last Sunday’s Grammy awards broadcast, where they performed with Mumford & Sons and Bob Dylan, the Avett Brothers are bringing their show to DAR Constitution Hall on Friday night.

Linguistically speaking, folk rock is a genre that shouldn’t exist. Rock is too powerful, and folk is too sweet, to logically co-exist, right? And yet it does, and it is wonderful, and the result is pretty well captured in that photo at the top of this post: hard-rocking banjo, bluegrass with an edge, energy that rivals the Ramones and melodies and lyrics that wrap themselves around your head and won’t leave until you feel just a bit better about life. Listening to the Avetts, you learn what a kick drum can do to jump-start your heart.

The last time I saw an event at DAR was when Eddie Izzard returned to standup in 2008. The sound was so bad — no, seriously, I missed half the show because I just couldn’t hear anything — I haven’t been back since, missing Vampire Weekend and the Pixies and probably a dozen other great shows since then. The Avetts are that important — and that good — that I am willing to give DAR another chance. Some bands are just worth seeing, no matter what crappy venue they happen to book.

Tickets are through Ticketmaster. Sold out as of this writing, keep checking back for that final batch to be released. Craigslist has a few, too. 8:00. $35 and up, if you can find them.