I didn’t much like the Avett Brothers when I first heard them. The banjo was too much, the vocal harmonies sometimes too off-key, the melodies sometimes just on the other side of pleasant. That changed a little bit for me one day when “Ballad of Love and Hate” from 2007’s “Emotionalism” came on, where the banjo was replaced by an acoustic guitar, and the melody was a simple tale of woe delivered in a clear, mournful voice by Seth Avett. And finally, when “I and Love and You” came out in 2009, and I first heard the chorus to the title track, I was hooked. I got it. I was a convert. I was in love. In part, it was that as the band matured over the last few years, they’ve smoothed out the rough edges that first turned me off. And I also grew to appreciate the rough edges that remained. The Avetts and I, we met in the middle, and judging by the crowd on Friday night, I’ve got plenty of company.

The Avetts are a genre unto themselves. Yeah, there’s a banjo, but the sounds Scott Avett makes come out of it are light years away from the “Deliverance” stereotype. The opener, Jessica Lea Mayfield, was as country as you can get — woman with an acoustic guitar and a twang, backup guitarist in a cowboy hat, songs about a broken heart — but the last song we heard on the sound system before the Avetts took the stage was from the Beastie Boys. When the lights came up two hours later, Nirvana came out. They just put the pieces together, the best pieces they can find buried deep in any musical culture you want to name, and you’re free to call it whatever you want. Watch the first 45 seconds of “Talk on Indolence” here and try to come up with your own adjective that describes what’s going on: 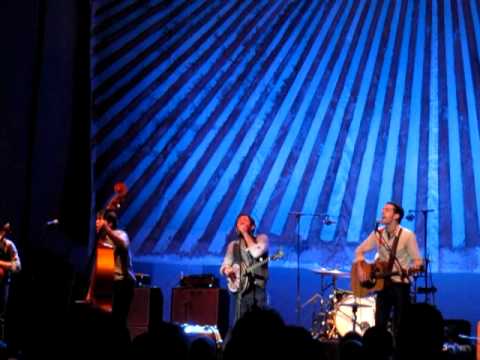 Awesome, in the truest sense of the word. That’s the best one I’ve got. A sibling is a curious creature. My own brother doesn’t quite remember my exact birthday, but our default modes are the same. The Avetts know this strange chemistry, and they use it to their advantage in creating art. Friday opened with the two brothers standing alone before the crowd, Scott with a guitar and Seth with his hands in his back pockets, crooning “Murder in the City”: “I wonder which brother is better, which one our parents love the most,” they harmonized together. “Always remember there is nothing worth sharing like the love that let us share our name.” Scott and Seth have been creating music together for a long time under various configurations and a few different band names, but it’s not for nothing that they have found their footing and their fame under the Avett Brothers name. Each brother is probably better in different ways, but together they are so much greater than the sum of their parts.

And on stage, that sum is multiplied again with the addition of Bob Crawford on bass, Joe Kwon on cello and Jacob Edwards on the drums. Songs like “Will You Come Again” became harder, faster, more boisterous when the full band is partying onstage. And then they followed it with the most country, twangy version of “I Killed Poor Sally’s Lover” imaginable. The Avett Brothers know the genre game, and they’re actively thwarting it, giving the audience almost an overdose of country, taking it just far enough to Opryland before switching that energy into something closer to punk and then flipping around 180 degrees to what can best be described as arena rock. If the phrase “punk banjo” exists, its definition is Scott Avett. The party was punctuated four or five times through the night when the Avetts stood by themselves before the crowd, these two brothers and their guitars, simply singing and singing simply, stripped of the energy — but not the passion — of their earlier songs. That’s when they brought out songs like “Sanguine” and “Bella Donna.” Listen to this beautiful performance. Or try to, anyway, because I give you about 20  seconds before you want to punch Squealing Harpy Chick in the throat for repeatedly ruining it: 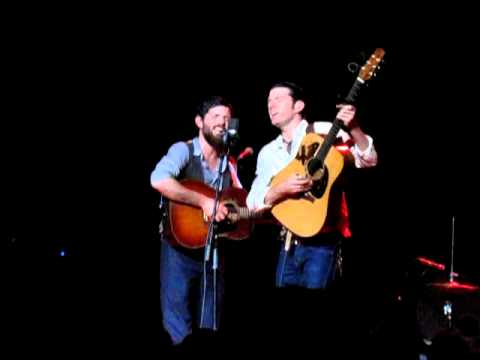 Which brings me to a plea to the ladies (and a few men) of the greater DC area. Yes, the Avetts are pretty. The songs are, too. It’s harder to appreciate both when you are squealing at the most inappropriate moments imaginable. Did you notice the lights dim and everyone else get quiet? Calm down and LISTEN to the beautiful things happening on stage.  That the Avetts continued to be so gracious as the show went on was a testament to their class and not an encouragement to you to keep shouting out marriage proposals. I’m embarrassed for you and for whatever friends you came with, if they even wanted to call themselves that by the end of the night. To put it another way: shut the fuck up. One more time for the slow ones in the back: shut. the. fuck. up. And if you’re incapable of controlling yourself, use one of those acoustic interludes to go visit the beer line again, because it’s clear from your inability to handle yourself in public that that’s where you’re most comfortable.

No, I don’t expect or want silence.  I don’t mind talking during a show, and I absolutely love the shared experience of singing along with a hall full of people, but what happened Friday night was an embarrassment to music fans everywhere. There is a time and a place for shouting, and the moment when two brothers are pouring their hearts out on stage is not it. One friend said over Twitter that the crowd reminded him of a Dave Matthews Band show and wondered if that was the sort of place the Avetts are heading with their fame (ugh). Another said it’s just what happens at DAR, that the place attracts the kind of people who wouldn’t go to smaller, more intimate venues like the 9:30 Club or Black Cat. What do you think, readers? Is it the Avetts’ fans, or DAR, or just the full moon on Friday night that turned normal people into vibe-killing assholes? The Avetts are masters at crafting not just a good song, but a good time. Their setlist is a work of art. It has a mood and flow that takes you on a journey: it lifts your heat, fills your body with the urge to smile and move, lifts you again, and pauses at the top for a poignant acoustic interlude before starting the whole process over again with a bang from a kick drum. (Another note to the ladies in the back: that kick drum is your cue to start screaming again. Not, I repeat, when everyone around you is standing in rapturous silence.)

The progression is mirrored on stage. Cellist Joe Kwon started the night standing politely to the left, just chilling, doing his thing. By the end of the night, his bowstrings were shredded and the cello itself was alternately being held under his arm like a guitar and beaten like a drum. Check him out on the far left in the opening moments of this video, doing a jig with bassist Bob Crawford during “I Killed Sally’s Lover” — these guys have built up so much energy during the show that tapping a toe just isn’t enough. Seth and Scott Avett traded off on the keyboards and vocals, like a relay, racing each other from song to song, building up the energy until finally Scott had to bound across the stage and bounce up on a stack of tower speakers just for the release. No one on stage spent much time standing still, bouncing instead and and encouraging the audience to join in the fun. And we did.