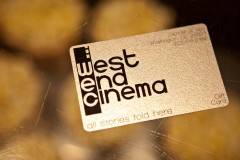 There has been lots of buzz about this race, typically Best Picture and Director are a match set but lots of prognosticators are predicting a split with King’s Speech winning Best Picture but David Fincher winning Best Director. The experts reason the Academy may try to share the wealth but Levin thinks that’s over thinking it. “I don’t know if it is ever that deliberate- I don’t think that anybody who’s filling out their ballot thinks, ‘I’m going to split my ticket.'”

Levin thinks Fincher will get the nod for creating a dramatic and captivating film from a real-life story that Facebook co-found Chris Hughes describes as, “a little more boring and quotidian.”

There isn’t much of a race here, Steinfeld is the front runner with perhaps Helena Bonham Carter (The King’s Speech) or Melissa Leo (The Fighter) in as dark horses. Leo has gotten some flack recently for purchasing ads in the Hollywood trades to promote herself. Typically that kind of work is done by the studios behind the nominated films.

So did Leo go too far in buying her own ads? Levin thinks not. “This is commerce- these are people’s careers, studios campaign, why can’t people campaign? People should be proud of their work.”

When talking about Portman, Levin described her role as a stretch beyond what she is typically known for, and that’s a plus. “It’s that sort of transformational role that Oscar voters go for,” he explains.

How about Annette Bening  for The Kids Are Alright? Sharing the screen with Julianne Moore doesn’t help her says Levin, “I really thought the Kids Are Alright was more of an ensemble film than a star vehicle.” When compared with Portman, Bening’s role wasn’t as prominent.

As Levin and I joked, women have been in love with him since he was Mr. Darcy in Pride & Prejudice. I remember watching all 300 minutes of it back in middle school.

“Well there’s a direct correlation to the number of Royals in your film and the number of Oscars your film gets,” joked Levin as we reached this category. All kidding aside, Levin thinks The King’s Speech is the film that will best appeal to those that ultimately choose the winner. “What you have to keep in mind is who votes in the Academy Awards,” he explains,  “they tend to be more senior members… I think the older audience is going to respond more as votes to The King’s Speech.”

However he does have a few dark horses in mind,  “film goers, not necessarily academy award voters, but film goers no longer make the big distinction between animated films and live-action films… I would not be surprised if Toy Story 3 makes a late push.”

He also thought highly of True Grit, “it played very differently than some of these other films- it wasn’t like a prestigious film, it was released as a mainstream film. It doesn’t have that sort of elitist aspect to it- if the public was a part of this it would get a whole lot more votes.”

There is one last piece of advice for those in Oscar pools, pick the Social Network for best picture. With The King’s Speech the incoming favorite, zig where others are zagging.

Tomorrow morning I’ll be back with Oscar picks and comments from the We Love DC staff, just in time for your Oscar pools!