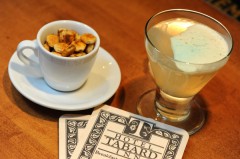 For Tabard Inn, Chantal Tseng took her inspiration from Edward Hopper’s “Ground Swell”. The 1939 painting depicts a group out on a sail boat on blue water under blue sky, so that her drink suggested warm summer times is no surprise; she created The Sea Legs Daiquiri. Our own [F]edward – who just happens to have had a print of this very painting oh his wall since college – went to sample it:

“The cocktail itself was in two significant parts, the Daiquiri (Mount Gay silver rum, lime juice, and sugar) and the foam (rum cream whip, sprayed with Blue Curaçao for color). I liked the Daiquiri and loved the foam, but the two of them were pulling in opposite directions. The snack pairing, savory oyster crackers roasted with worcestershire, cayenne, and paprika (roughly the flavor profile of spicy homemade Chex mix), was an unqualified success, balancing the tartness of the liquid portion of the Daiquiri.”

On Wednesday, I headed over to PS7’s to taste Gina Chersevani’s cocktail, Between the Lines. Inspired by Black Popcorn, a 1965 piece by beloved Washington Color School painter Gene Davis, the drink was visually beautiful – with three differet-colored stripes running across the top evoking Davis’ famous stripes. Unfortunately, we arrived a bit too late – the last one for the evening was sold to the girl just next to us. Luckily, Ms. Chersevani assures me they have more now – and, like all the ARTINI drinks, it will be available all month long. If you also missed out, be sure to make it over there to sample. (This was my first visit to the bar at PS7’s and the drink I had instead of the ARTINI, the Salted Caramel, comprised of house blended rye, Cynar, vanilla, and sea salt, was very delicious, so I left happy enough.)

Newest among the bars competing in ARTINI and the only H Street outpost is Church & State. Breast Jar, the artwork behind Josh Berner’s drink, is the only sculptural piece among the twelve, and is of a medium close to a bartender’s heart: glass. In a video of making the drink, Mr. Berner explains his rationale behind each component of The B Cup, such as that he stirs, rather than shakes, the drink to maintain the glass-like clarity, and the single sphere of ice meant to suggest the roundness of the single breast at the jar’s base. Clearly, a lot of thought went in to directly matching the drink to the art. As for how the bison-grass vodka drink tastes, William reports:

“It was neither sweet nor bitter, but had subtle, light, smooth floral notes that crept up as you progressed with the drink. Very mild, slight citrus flavor, with complexity established in its inability to be pegged to one single sweet/sour/bitter flavor.”

This is the mid-point among the feature nights, with six more bars still left to be featured. Next week, we will be drinking at Cafe Atlantico, Potenza and Art and Soul.