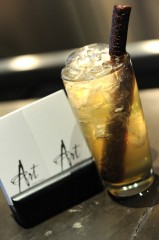 Featured this week: Café Atlántico, Potenza, and Art and Soul.

This week, the three drinks all fell into a theme – things stuck into other, unexpected things: We found leather in our tequila, flower petals in our ice cubes, and beef in our glasses. That may be where the similarities of these cocktails ends.

This week, Fedward bit (drank?) the animal-product bullet for me twice and filed this report:

“Café Atlántico’s “Daisy If You Do,” inspired by Frederick Remington’s Coming Through the Rye, is made with leather-infused tequila. You read that right. “How do you get food-grade leather,” I asked (so you don’t have to). They get it from a saddle maker who treats it with vegetable oil, so it is cured, not tanned. The flavor was vegetal and savory. I’m glad I had it, but it’s not a drink I’d ever order a second time.

Art & Soul’s “Coleman’s Juice,” inspired by Coleman’s Cafe by William Christenberry, features whiskey, mezcal, and “a house made Slim Jim.” I was a little worried when I counted the ingredients (the others are yuzu-agave syrup and custom-blended vanilla cola), but it was excellent. Imagine a Bourbon-and-Coke, upgrade everything in it, and then throw in an utterly unnecessary Slim Jim. If they take the Slim Jim out (and they should; it was a bit pasty), this one’s a keeper.”

That left me with Wednesday’s (totally vegan) feature at Potenza, based on, and sharing a title with, James Hyde’s 1995 mixed-media work Ratchet. Visually, the cocktail shares a remarkable resemblance to the piece’s swatches of color incased in clear glass. There were fruits and flowers of every variety, including a giant specially-made ice cube containing more flower petals. These all floated in a mixture of Heradurra Silver, Montanegro Amaro, lemon juice, and a house-made pineapple gomme syrup. On top, a cactus gelée of a very unusual teal-blue color and distinctly candy-like fragrance.

There is only one more week of feature nights, with three more bars still left to be featured. Next week, we will be drinking at AGAINN, The Gibson, and P.O.V..

For our previously-drunk ARTINIS, see: Week Two and Week One.