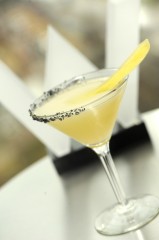 For the last time in 2011, Friday Happy Hour takes a look at the Cocoran’s ARTINI 2011 Each of the twelve participating bars have a created a special cocktail inspired by works from the Cocoran’s collection which are on offer leading up to the April 2nd gala. Each bar gets one “feature night” when their creation is showcased and a portion of the proceeds is donated to the Corcoran – though the drink continues to be available the entire month.

With the gala tomorrow, this week saw the final three features: AGAINN, The Gibson, and P.O.V.. All three drinks this week were quite good in what was perhaps the strongest line-up of any of the four three-bar groupings.

At AGAINN, JP Caceres (who has made several appearances on We Love DC in the past) crafted The Fair Daughter, inspired by Daniel Chester French sculpture The Sons of God Saw the Daughters of Man That They Were Fair. The drink is itself pretty to look at, with a cloudy, pale yellow color through most of the cocktail glass, with a darker, purple bottom. The drink felt a bit out of step and spring-like for the chilly evening, but with a pleasant, not overly-sweet, blend of vodka, citrus, and crème de violette seemed like it would have been quite lovely to sip with some lady friends in tea gloves on a warmer, sunnier day. (Which is not to imply my male companion disliked his taste of it – he was just more excited by his fancy Pimm’s Cup.)

Inspired by The Last of the Buffalo, bison-grass vodka is an intuitive base for the “Bonfire Shelter” at The Gibson – however, nothing else about Jonathan Harris’ creation is expected. Before presenting the drink, a waitress dribbles a few drops of fragrant essential oils on the imbiber’s hand, just between the thumb and first finger. This intense perfume commingles with the elegantly simple cocktail as the tumbler is tipped towards the mouth. This modern approach creates a moment of whimsy and engagement with the drink presented that was by far my most interesting experience of any of the ARTINI drinks. I also appreciated that this was one of the most spirit-forward of the cocktails as well as simplest – perhaps my tastes in drinks run towards minimalism as much as my taste in art.

The final feature night of ARTINI was at POV, where Fedward tasted the “Joan’s Palate” inspired by the lovely 1979 Joan Mitchell painting Salut Tom.

“It takes on both the colors in the oil painting with pomelo, grapefruit, and lime, and the name with Hayman’s Old Tom gin. The base spirit is the bison grass vodka Żubrówka (here’s the full recipe, except for some confusion about the naming of Old Tom gin). It’s served in a coupe half-rimmed with black lava salt, garnished with pomelo peel. The result was a refreshing citrus cocktail, vaguely reminiscent of a margarita (by way of the lime and salt – and for that matter, the Social Chair [Ed’s fiancée] and I could both have done with a little more salt), but with intriguing depth thanks to the combination of Old Tom gin and Żubrówka. Based solely on the liquid contents I’d put this one in a tie with Coleman’s Juice at Art & Soul, but using the garnish as a tie-breaker I’d say this week’s was my favorite ARTINI cocktail.”

For our reviews of all previous ARTINI cocktails, see Week One, Week Two and Week Three.