Do not expect any retort from Alzner, Mr. Bennett

“I probably won’t get into too many Twitter battles. I am sure that person knows that I kind of won that one right there,” Alzner said. 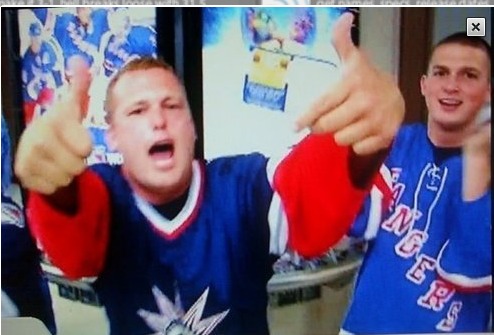 Sorry buddy. Not this year.

Revisiting the keys heading into the series, a couple major themes emerged from the Capitals on Saturday and they were the reason Washington was able to finally put skate to throat and blow a team out of a series.

Washington came out of the gates in Game 5 with energy and, yes, fury and held the puck for almost all of the first period.

“I thought that we came out like a ball of fire,” defenseman John Carlson said.

Ted Starkey, a writer for the Washington Times, tweeted near the end of the first period that the zamboni would probably not be necessary for the Rangers’ side of the ice.

“They had the puck,” Rangers’ coach John Tortorella said. “We had problems getting the puck away from them. You got to give them some credit.”

If you look at the entirety of the NHL playoff landscape, only two teams have been able to advance to the semifinals from either conference thus far. Outside of home teams not being able to win games, the two teams with the best puck possession over the course of a series are the ones that have moved on. Detroit, which pretty much founded the NHL version of puck possession hockey, swept the Coyotes out in four games. Now the Capitals have used the puck possession style to win Game 5. It was not like that the entire series, but it goes to show that it is a winning formula when your defensemen can get through the neutral zone and your wings play chip-and-chase and cycle well in the corners.

Mike Green got the Caps on the board first with a scrum goal that went off of New York center Brandon Dubinsky and erupted into a melee after the fog horn, sending five players to the box (two from each team for roughing and a bench minor on the Rangers) at 5:49 in the first period. Washington set the tone and kept at it all game.

Outside for a few beauties, there were not many pretty goals in the series. It was a grind-it-out, crash the net, get in a scrum, repeat kind of series. Of the five games, two went to overtime with one in double overtime. The playoffs ain’t easy, nobody said they was going to be.

“That was a really tough series,” Caps’ coach Bruce Boudreau said. “It was done in five but, I mean I think John (Tortorella) would say the same thing … either team could’ve won all five games.”

So, how were the Caps so significantly better that they were able to close it out in five?

The answer is a bit of a mixed bag, but there is one definitive place where the Caps can look that made the difference in the series.

“He did not give them a chance, he was great,” Boudreau said of the Caps young goaltender Michal Neuvirth. “He covered pucks up, he wouldn’t allow rebounds and we would get chances to change and slow it down when we wanted to do that. I am telling you, a lot of people do not know his name too much I mean outside of our circles but he is a heck of a goalie.”

Neuvirth leads all playoff goaltenders with a 1.38 goals against average as well as with a .946 save percentage. This against a Rangers team that had put up seven and six goal totals against the Caps this year and seemingly knew how to score on against Washington (though, overall New York was not an especially dynamic offensive threat). Yet, the Rangers scored a grand total of eight goals in five games, were shutout once and almost shutout in Game 5 before gaining a goal with 31.5 seconds remaining in their season.

Perhaps more impressive, Neuvirth out-dueled Henrik Lundqvist on a save-by-save basis. It is a little odd to say, but the Caps defense, even without Dennis Wideman and Tom Poti, was deeper and more efficient in executing the game plan than the Rangers.

“I think they really bought in,” Boudreau said of the mid-season defensive change. “After that 7-0 game (against the Rangers in December) on, I haven’t checked the numbers, but I bet you from that game on we had the best goals against in the league because these guys want to win and when they heard that this is the way we think we have to play to win, they also said let’s do it because we want to win. I think it has come a long way.”

Alex Ovechkin added a goal in the second period with a great burst of speed that beat top New York defender Marc Staal down the right wing. Ovie turned to the slot, went to the backhand and beat Lundqvist.

“I  think I have some pretty good speed down there,” Ovechkin said. “Hanner [Scott Hannan] gave me a pretty good pass and I just do what I have to do to score goals. It’s my job.”

Alexander Semin added a goal late in the third period to account for the scoring.

Now, the Caps wait. They got dinged up a couple times through the series and Mike Green took a puck to the face in the second period in a very similar play to when he got a concussion almost eight weeks ago when he blocked a shot with his head. The semifinals are not going to start until next weekend so the Caps have six or seven days to make sure that Green is healthy and not again concussed, that Jason Arnott is not too hurt, that Mike Knuble can get a week to recuperate and so on. Carlson and Alzner can use some rest after logging big minutes all series as well.

“We are moving on, we get to play hockey some more,” forward Brooks Laich said.

One thought on “We are louder: Caps usher Rangers out of the playoffs in Game 5”