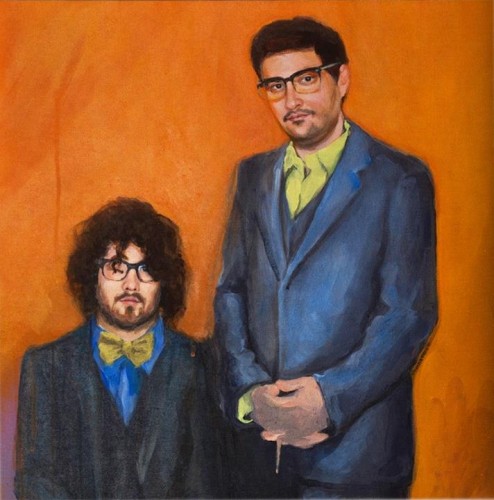 Alexia Kauffman: Thanks so much for taking the time to answer a few questions for We Love DC! What musical projects/bands were you in before this one?

AK: What did you listen to growing up?

DZ: We both had fathers that forced us to listen to a lot of Motown. There was also a lot of Joe Jackson, Elvis Costello, John Lennon, and Paul Simon.

AK: How did you each first start playing music?

DZ: Josh was in bands since he was really young. I think he was in a band with some early twenty-year olds when he was 15. I dreamed of playing sports growing up, but had a knee injury and had to pick up a hobby at 12 years old. My dad bought me a guitar and I never played sports again.

AK: How did you two meet?

DZ: Like every long-lasting couple meets: over the phone. Actually we both knew about each other’s bands and had respect for each other’s projects.
He called me out of the blue one day, though, and asked if I’d like to make some music with him. The first day we got together we wrote “Simple Girl”.

DZ: We both are amateurs on several instruments. I play a 1973 Fender Telecaster thinline. Josh has some sort of vintage Tele as well. My favorite pedal is my micro-synth by Electro Harmonix. It makes the distorted bass sound in “Nothing But Our Love” at the end. Josh loves to use his Kaoss pad to loop random things. In studio our favorite is the vintage Space Echo.

AK: What is the songwriting process like for you?

DZ: It’s different every time. We try to channel karaoke from the future.

AK: What are your influences?

DZ: Anything that is memorable. I think that is why we have such an affinity for Motown music. It seems as though those songs have been eternal.

AK: You all harmonize really beautifully together vocally. Did you grow up singing/sing in choruses or choirs?

AK: Do you feel like you’re a part of a music scene in Detroit? What is the scene like there right now?

DZ: Of course. The scene is very hopeful. I think there are a lot of young bands that have ridiculous potential. Josh and I have produced other bands in Detroit and are continuing to try hard to stay relevant. What’s great about Detroit is that anyone can do anything. Living costs are very low and there isn’t a highly competitive scene. It is a good formula for creativity.

AK: I see that you all played Lollapalooza this summer. How was it playing for such a huge crowd?  Any favorite moments, or artists that you met?

DZ: That was the best show we’ve ever played. We felt a greater sense of energy when you have that many people to feed off of. We became one step closer to feeling what it’s like to be a professional athlete and perform on the grandest of stages. My favorite moment was being backstage for Eminem and having Shawn Marion from the NBA champion Dallas Mavericks say hi to me. He apparently is a JR JR fan.

AK: You all have been touring a lot this past year- how is that going?

DZ: Tour has always been a surprise for us. It seems to get better and better. The feeling you get when you show up to a town where you don’t know anyone and have hundreds of people wanted to see what you do is still a big thrill for us. I don’t think that will ever get old.

AK: If you could play a show or collaborate with any artist/band, who would it be?

AK: What are you listening to now?

AK: Plans for the future?

DZ: We had a goal when we started to play Lollapalooza. Now we need some new goals. Out sell Ricky Martin in South America?