Nats Game Seats Below
courtesy of Mr. T in DC

2011 was not a banner year for sports in the District of Columbia, I’m afraid to say. While the Nationals worked hard to move up the NL East ladder, they still had a losing record. The Capitals once again flamed out in the second round of the Stanley Cup Playoffs. The Wizards finished with a .280 winning percentage as the team struggled to gel. Once a bright star in DC’s sports constellation, D.C. United finished out of the post-season again. And of course there was the Redskins’ struggles this year, even as they parted ways with McNabb and Haynesworth.

It wasn’t all bad news, though, and we’ve gathered up some of the top moments in DC Sports for 2011 for you after the cut.

The Winter Classic has become the second jewel in Hockey’s crown, with teams fighting to have their own berth in the outdoor event that moves from NHL city to NHL city on New Year’s Day. The Penguins were picked as host for 2011, and hosted the Capitals on New Year’s Day at Heinz Field. The series was heavily anticipated by fans from both cities, as well as the subject of a phenomenal HBO sports series, the Road to the Winter Classic, which drew critical acclaim.

Our Ben Rome was at the event, and has a full recap from the game, and a two–part feature on what it was like to be in Pittsburgh for the big day. Despite some lousy (read: warm) weather, and some occasional rain, the Caps triumphed on the day, with a pair of goals from Eric Fehr, and 32 saves from Semyon Varlamov. Both would depart the team after the end of the 2010-2011 season, Varlamov in a trade to Colorado, and Fehr leaving to free agency to the Winnipeg Jets.

The rest of 2011 would be a disappointment for the Caps, but on this shining day, there was much reason for optimism for Caps fans in DC, as it looked as they had mastered their rivals ahead of the playoffs. walking away with a win
courtesy of philliefan99

This was a season that went far better than expected for the Nationals, who ended 2010 with a 69-93, and without their number 1 draft pick who was recovering from Tommy John surgery. Many wrote the season off for the Nationals, expecting another 70-73 win season and a spot in the cellar of the NL East. With weak starting pitching, and many offensive question marks, it looked as if the Nationals were set for another season in trouble. In early June, the Nats found themselves 8 games under .500 and headed into a very unfriendly San Diego ballpark.  The Nationals started a 8-game winning streak, and added 4 more after a single loss to Baltimore at home, to move back to .500 near the midpoint in the season.

Then the unthinkable happened. Shortly after a dramatic 9th inning victory over Season to move above the .500 mark, manager Jim Riggleman quit the team, citing a conflict with the team’s general manager over his contract. In the 24 hours that would follow, Riggleman went on the Charlie Sheen Memorial Media Tour to tear as many new ones as he could. Bench Coach John McLaren would take the team for three days, ahead of Davey Johnson’s arrival on the 27th of June as the new field manager.

The team would struggle through July, but rally in the late months, especially after the return of Strasburg to the bump. They would finish at 80-81, having had a game against the Dodgers rained out that wasn’t necessary enough for the standings to merit a trip between the two teams. I like to think they’d have finished at .500.

This is one of those blurbs that you’d hope you’d never have to write, let alone be ecstatic about. Albert Haynesworth, he of the extensive contract, the poor fitness test results, and the sexual harassment lawsuit, was traded to the Patriots for a single 5th round draft pick in 2013’s draft. Haynesworth had long been a thorn in the side of the team, but carried too high a contract to make him valuable trade bait. Fortunately, the Patriots were willing to take a chance, but sadly it wouldn’t work out for them, as they’d just drop him in November. How can you not love the hometown hero story? Lamont Peterson, once a homeless youth on the streets of DC, fought Amir Khan for the WBA and IBF Light Welterweight titles in early December, only to emerge the victor in a controversial split decision at the Walter E. Washington Convention Center.  DC hadn’t hosted a championship fight in close to two decades, and picked up their first big sports championship in a decade. While the split decision has proved to be fairly contentious, with Amir Khan suggesting that he was robbed and demanding a rematch in early 2012, the victory for Peterson is a career moment, as he improves to 30-1-1. Look for a rematch in early 2012. 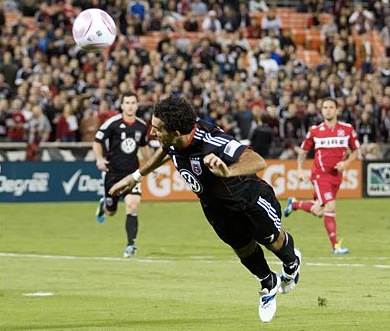 Photo by Paul Frederiksen for DCUnited.com

You’d have to look pretty hard for a better move in DC sports this year than the pickup of Dwayne De Rosario by D.C. United in a trade that sent midfielder Dax McCarty to the Red Bulls. “De Ro”  put up 13 tallies and 7 assists for United in his time with the Red & Black this season, winning both the Golden Boot and MVP honors. McCarty put just 4 assists on his card this year, and though he improved, the straight up trade was nothing short of a triumph for United.  Any trade that has the opposing team’s GM saying the equivalent of “Of course we didn’t make a mistake!” means they made a terrible, terrible mistake.

We look forward to seeing De Ro back in 2012 and beyond in the Black and Red as Olsen’s Army keeps marching on.