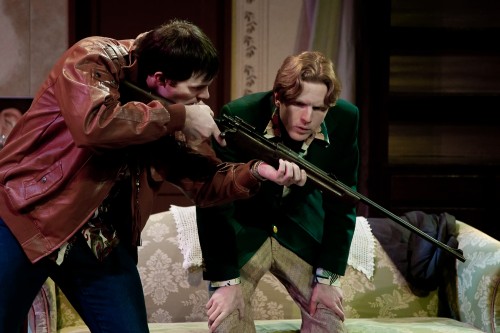 Caught in he middle are members of the Newquist family. Parents Marjorie and Carol (Emily Morrison and Craig Miller) are victims to a freak shooting that takes the life of their war hero son. Daughter Patsy (Robin Covington) is an independent woman who brings home her latest partner/reclamation project Alfred (James Finley), who has decided to take an extremely passive approach to the situation. Even though he towers  over most people, he refuses to fight anyone and as a result is often bruised and battered by muggers who beat him up until they grow too tired to throw anymore punches. Instead of dealing with life’s troubles he would rather daydream until the moment passes. Rounding out the family is the somewhat closeted Kenny (Evan Crump), who’s sissy mannerisms hints at him being a secret homosexual.

The family dynamics of the Newquists are anything but ideal. The family dinner is filled with so much arguing you would think it was ripped from this SNL sketch. The eventual wedding between Patsy and Alfred becomes a comedy of errors as Alfred’s atheism results in the hiring of an oddball existentialist minister (Bill Gordon) who flies off the handle.

However Little Murders isn’t really about the Newquist family but about the forces of violence and incivility that Feiffer believed was sending America into a nervous breakdown. The local homicide detective (Steve Lebens) is worn down from the hundreds of unsolved murders. Father Carol calls for martial law, stronger government involvement, and more surveillance in a chilling speech that is very foreboding in today’s post 9-11 world.

Feiffer’s observations are interesting but they are lost in the show’s delivery. The acting fluctuates between 1 and 11 throughout the show. Unlike Elliot Gould’s subtle yet poignant performance as Alfred in the 1971 film adaptation of the play, the Alfred in this production goes from cardboard stiff to completely normal. Arguments go from intense screaming to intense crying to resigned silence.

At 40 years old, Little Murders still has a message for the audience. Even though America is working to decrease the senseless sort of violence the show depicts, the theme of growing disrespect and incivility is one that still rings true today.

Would we reach the boiling point at that ends the show in spectacular fashion? With a more sensitive generation of Americans that are subjected to bullying, trolling, and online harassment, perhaps.