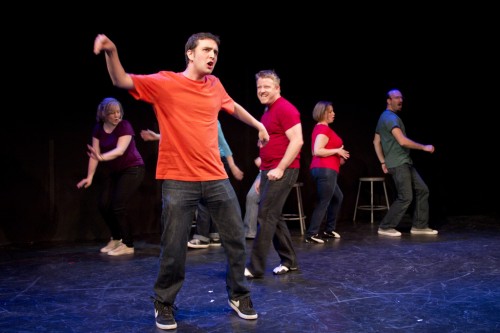 Washington Improv Theatre’s “iMusical” has been a long-standing staple to the theatre’s slate of rotating productions. For several years the improvised musical has taken on new formats and wrinkles and the latest includes a trip back in time.

Last weekend I visited The Source on 14th street to see what happens when a group not only has to create comedic material on the fly but also add a little song and dance as well.

The show starts with the selection of the time period, which was done by a random audience member who chose among four mystery cards. In the show I attended the ensemble was sent back… to the future!

After collecting suggestions of futuristic themes and ideas (rocket ships and really small iPods), the ensemble got to work in creating a musical about a two families who become separated from their sons. Because it was in the future it was only appropriate that one family consisted of a brazen space explorer father and a half-human, half-cylon mother.

Things certainly got interesting that night.

The ensemble kept the audience laughing with jokes about Skype as an old technology yet the use of “MySpace angles” never becoming out of style. Their silly, irreverent humor was a great way to welcome in the weekend.

The improvised songs don’t touch the improvisational genius of Wayne Brady, I noticed a few verses and choruses repeated as the gears turned in each actors’ head to come up with the next word. It was actually an interesting process to observe and is the magic of improv as a whole. You lean in a bit closer with rapt anticipation, in total suspense of what would be the next line or lyric.  Did every made-up line hit the mark? Not really but that is not the expectation in improv. The idea is to create a free-flowing, open environment where the performers are free to truly let loose and have fun. The players at Washington Improv Theatre have become masters or taking risks and letting it all hang out.

Josh Waytz was especially entertaining, he got stuck doubling as the son for both families and ended up with a lot of time on stage. He has an uncanny resemblance to supergeek Wil Wheaton that really made him shine in the future world setting. WIT player Sarah Donnelly also did tremendous job belting out lyrics while channeling her inner T-X and director/accompanist Travis Ploeger did a fantastic job in the underrated role of coming up with music faster than the players can come up with words.

While iMusical Time Machine is only in production tonight and next weekend, it is a fresh take that hopes to renew interest in iMusical so it doesn’t fall into what I call the dreaded “Shear Madness” zone. For me the gimmick pays and results in a truly entertaining night at the theatre.