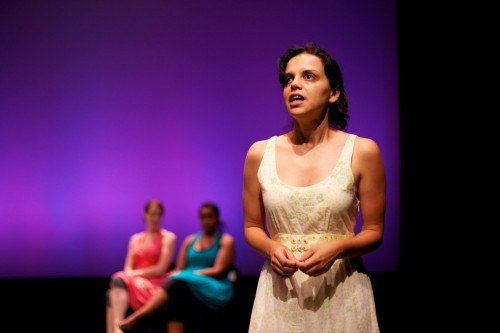 When the lights finally came up to reveal Reverend Jose and his three counterparts (Nora Achrati, Blair Bowers, Anastasia Wilson) the show’s format became more apparent. The four took prayer requests from the audience, delivered rousing and dramatic sermons, and engaged in song and dance. The audience didn’t know how to take it in at first. Prayer requests were met with awkward silence but eventually the crowd warmed up and found themselves standing, clapping, and singing along with the cast.

However the audience did not answer back when a Reverend ended with an, “Amen!”

Lee blurs the line between performance and service so closely that we catch ourselves, stopping just short of transporting ourselves into metaphorical pews.

The piece evokes strong imagery and colorful stories of mummies, unicorns, and chicken blood. The sort of stories that make you wonder if the cast is high on bath salts. The show’s spiritual barbs hit so hard that you may wonder if it is all in jest- that it is all a big ruse in the name of comedy.

Young doesn’t give the audience that satisfaction, and the discomfort remains. As a result the show will provoke many questions but leaves few answers. Director Michael Dove makes a smart move in following up every performance with a talk-back discussion to explore the issues that this show opens up.

Lee’s Church is an experimental theatre piece that will shake the religion tree but don’t expect everything to fall nicely into the right place- you will have to do a little picking up of the pieces after taking in this powerful piece of theatre.