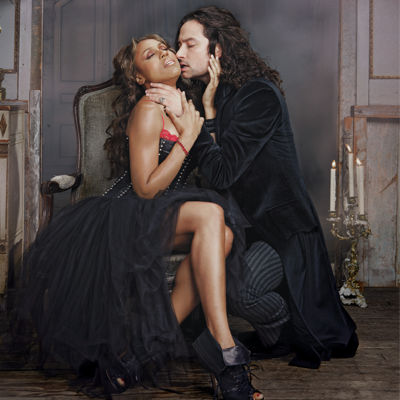 This new re-visioning of Jekyll & Hyde is custom-tailored for Maroulis and Canadian R&B star Deborah Cox who co-stars as Lucy, a call girl who catches the eye of both Jekyll and Hyde.  Like the show’s protagonist, however, there is a lack of consistency as the musical tries to balance between its traditional roots and a more contemporary rock ‘n’ roll feel. The show also has a bit of an operatic/Les Mis feel as every other line is delivered through song.

Our tale starts with the mild mannered Dr. Jekyll, whose backstory feels like a comic book action-adventure. Inspired by his mentally-ill father, Jekyll is hard at work to develop a formula to separate the good and evil in man. Finding a method of doing so would result in a utopian society where darkness can be stricken from the hearts of all. After being denied the chance to test his potions on a human being, he resorts to experimenting on himself–unleashing his inner demons that take on a persona of its own as Mr. Hyde. Trapped in the same body, Jekyll and Hyde fight for ultimate control in the setting of 19th-century London.

The production design says Rock: from the elaborate projections and animations to the Clockwork Orange-like eye make-up worn by most of the ensemble cast. A perfect suit for Constantine, who cut his teeth as an American Idol rocker, to wear. It’s only when the show swings back into more traditional fare that Maroulis seems a bit outmatched.

When it comes to the rest of the cast, the star power is there and shows in spades. Cox hits numbers such as “A New Life” and “Someone Like You.” Teal Wicks, who made her name in Broadway’s Wicked, leads a talented ensemble whose names we may not remember but faces we certainly will thanks to grandiose projected portraits that are displayed above them most times they are in the scene.

In the end, the role of Jekyll and Hyde requires dramatic transformation, much like any double role. While I’ve seen some good examples of this (re: Signature’s Dying City), Constantine doesn’t sell me enough on the switcharoo. To change from a meek-voiced scientist by day, a moral-less fiend at night requires more than simply letting down your hair and taking off your glasses.

This show needs a bit more tweaking before it is a true Broadway show. Luckily, it has plenty of road to travel this year before facing the New York crowds.