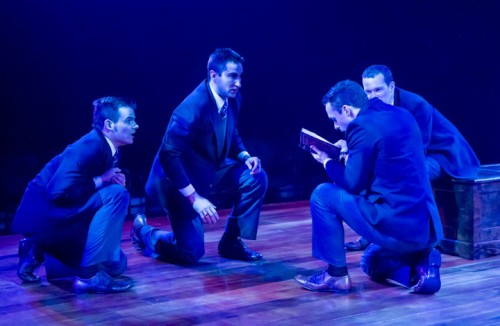 Signature Theatre‘s show titled “Shakespeare’s R&J” is less a take on Romeo and Juliet than is it an alternate presentation of it. We the audience witness four young men, seemingly attendees of a very regimented all-boys private school, perform the play from a hidden copy that they unearth from below the floorboards. The boundary between the play and their own lives blurs and internal conflicts are acted out on top of Shakespeare’s text, with a little Midsummer Night’s Dream and a few sonnet lines tossed in the mix.

That’s how I witnessed it. Here’s how Signature and writer/director Joe Calarco describe it.

A repressive all-male Catholic boarding school bans Romeo and Juliet in favor of Latin conjugations and the Ten Commandments. Four students unearth a secret copy and steal into the night to recite the prohibited tale of adolescent passion. While it begins as a lark, the story gradually draws the boys into a discovery of universal truth that parallels their own coming-of-age. A riveting drama within a drama,Shakespeare’s R&J transcends the boundaries between play and player.

I’m not sure I’d agree with the full extent of that description. The show’s staging and the use of the long red drapery for all the fight scenes are superb. All four actors deliver their lines and emote quite well, with a small caveat I’m not sure I’d lay at their feet. The idea of overlaying the boys’ real lives on the play’s text is interesting, if a little flawed. The biggest problems seem to fall at Calarco’s feet, with a decision to have all four of the young men always acting “up at 11” and a pacing that pretty well removes the divide between the play and the play within the play. 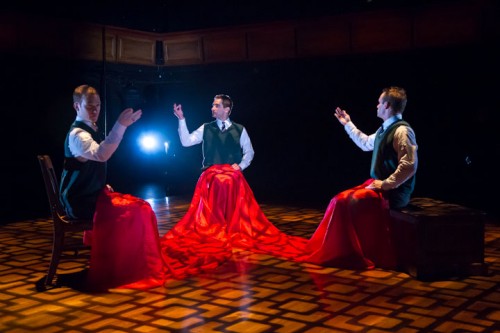 Let’s dispense with the energy level issue up front. It takes a minute to realize it, since this is the Shakespeare we all love and respond to in monologue – the high intensity St Crispin’s Day speech. Iago plotting against Othello. Romeo and Juliet at the balcony. But when you’re always at the peak you have nowhere else to go. Benvolio’s light-hearted goading of Romeo doesn’t get to provide us a fun interlude between intrigue and battle.

Which overlaps with the issue I had with buying the overlapping storylines. We spend a brief time with the boys working from the text, then they’re working without a net in near no time at all. There’s never a clear transition back into their lives outside of the play-within-a-play until the very end, and at that point the use of other non-Romeo and Juliet lines of Shakespeare don’t seem to make a lot of sense. If these kids are solely inspired to break free of their structure by this one secret copy where’d that come from? I’m willing to write off this always being at full-tilt as reflective of the young boys and their intensity but I felt like we grafted fully into the Shakespeare by the 30 minute mark and never really pulled back.

I wish that had gelled better for me, but the ride along the way was still fun. Theater in the round can be problematic, and I did have a brief interlude where I spent a lot of time trying to see around a wooden chest. But for the most part it was nicely done and I’m still smiling over how creatively one lone piece of fabric can be used to support many kinds of action.

Every actor, intensity issues aside, does a wonderful job of really living in the language. In my less generous moments I would speculate that I’ve heard a lot more Shakespeare recited on stage than I have heard performed on stage. Santer, Mills, Farber, and Daugherty all inhabit their Shakespearean characters and really speak every line.

That alone, if you love Shakespeare’s language, makes the time well-spent. If you desperately need a new take on the text you may or may not find this up to your desires.