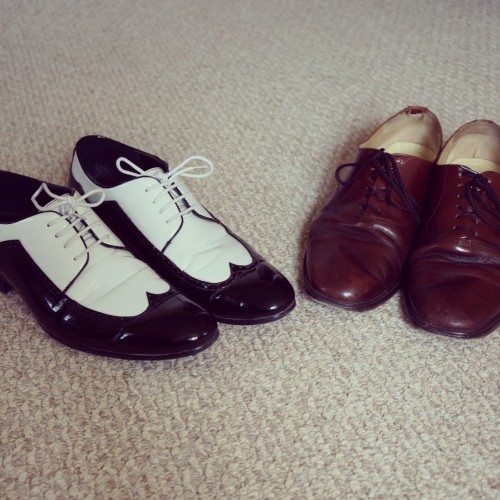 Very important fashion question: which pair of shoes do I wear with my Navy suit for #HHA13? instagram.com/p/X2aQaumsNP/

My day started with an important fashion decision, one that many were making all over The District as well…

What shoes should I wear?

With a navy blue suit the logical choice was brown. However those Gangnam Style kicks were calling my name from across the room. They were a hit when I wore them during the Inauguration. Could I repeat that same magic tonight? Drama Prom has always been about bold fashion choices. I took to Twitter for the answer. While @hanvnah indulged my Gangnam Style idea, the majority of my followers urged me to stick with brown. It was probably for the best. 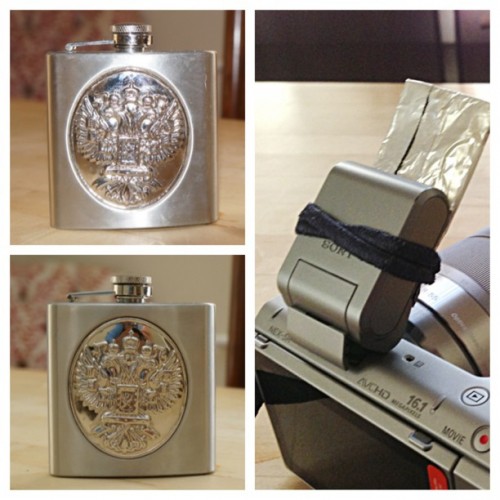 I start to gather the essentials for Prom Night: Cameras for snapping photos, my Mophie battery pack for charging my iPhone, and a flask for surviving the long 2+ hours of awards. It’s not Helen Hayes if you are not sneaking in alcohol. After prepping my gear I head out on a run to enjoy the lovely 70 degree weather.

Meanwhile actors Josh Morgan & Alexandra Linn are already at the Warner. Nothing like getting an early start to Drama Prom: 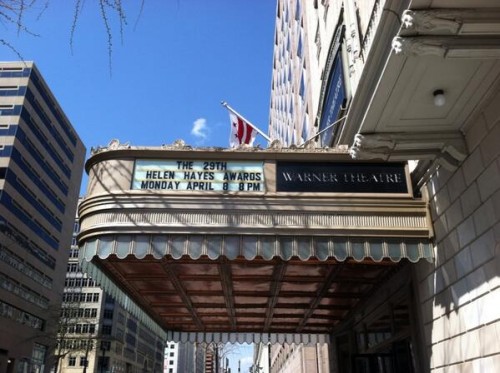 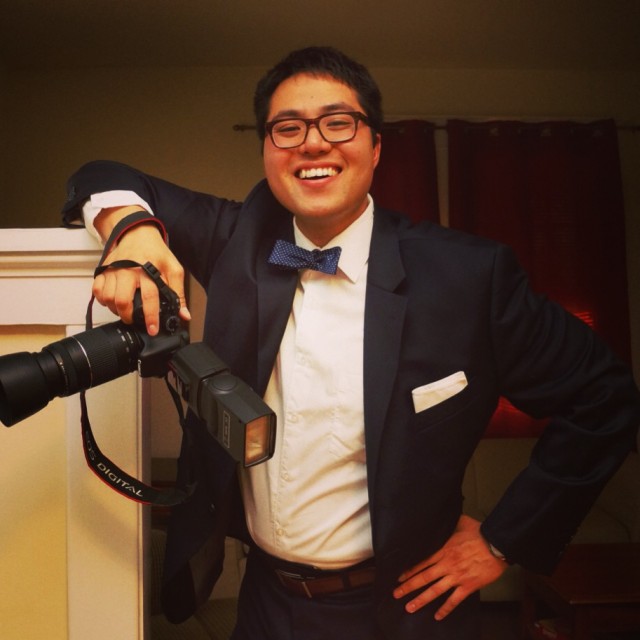 So far my preparations have gone without a hitch: no dates dropping out at the last minute, no frantic rush to get dressed, no technical malfunctions with my equipment. It was well worth taking the day-off from my day job to just relax and get prepared. I book a taxi on my phone and make my way downtown. I look ahead to smooth sailing for the rest of the night.

Things have went too smoothly… @theatrewashdc has appeared to have lost my ticket. Oh good they just gave me one. #HHA13 #DramaProm

It appears I spoke too soon. As I walked up to the media check-in table I was surprised to see that my name was not on the media list. I was one of the first to register. I spot Jenn Larsen’s name on the list but not my own. Am I going to come this far only to be turned away!?!?

While I control my oncoming panic one of the event planners recognizes me from Twitter and we chat while theatreWashington’s lovely publicist takes care of the mix-up. I am eventually handed a ticket and the night continues. 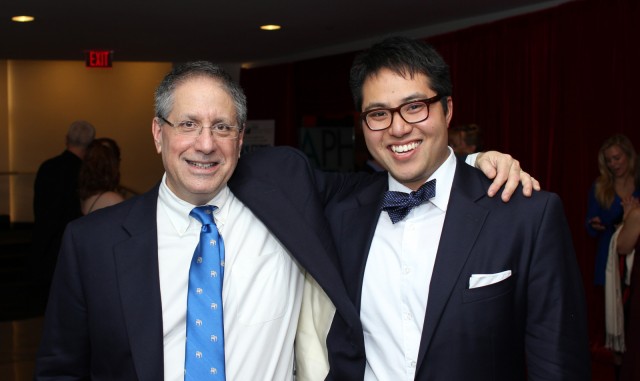 “I thought you were wearing a tux!”

As the Washington Post’s Peter Marks walks up to me in the hall he expressed his relief that he would not be the only one not in a tux that night. There isn’t really a dress code for Drama Prom; people dress up as fancy or as casual as they want. Here are a few photos of people’s outfits from Twitter: 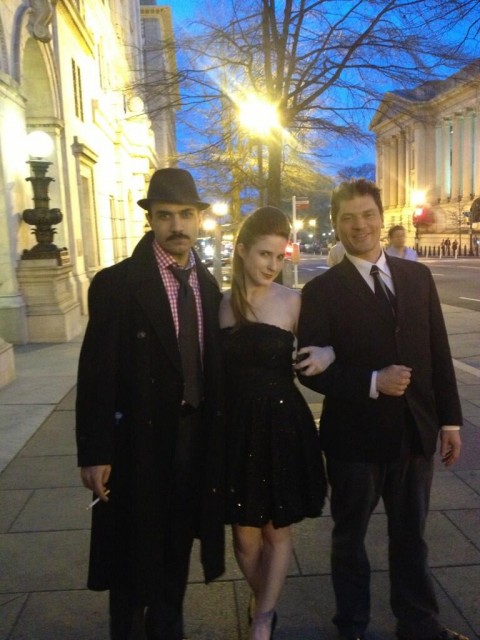 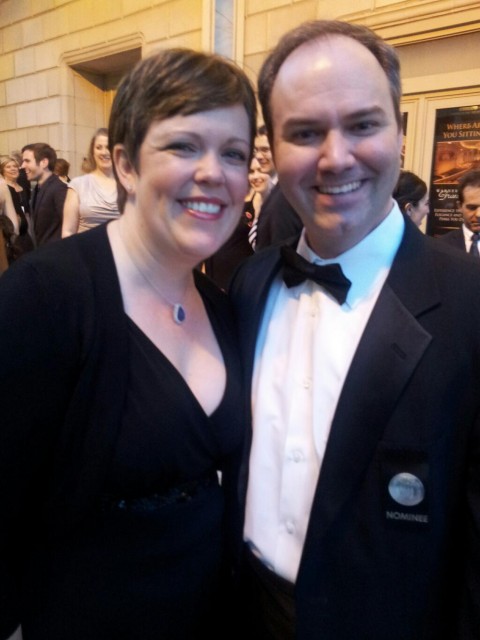 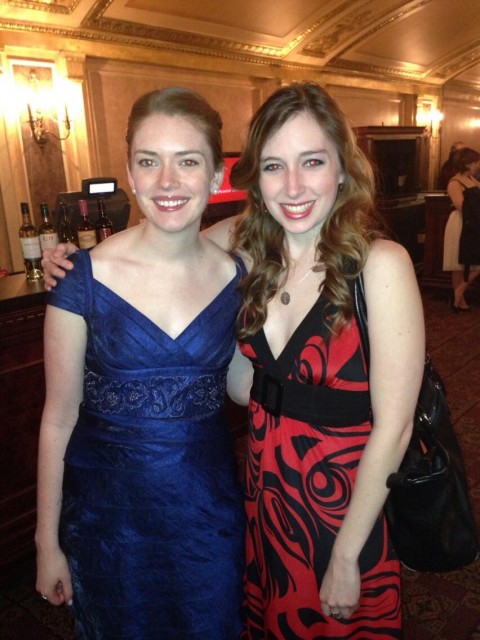 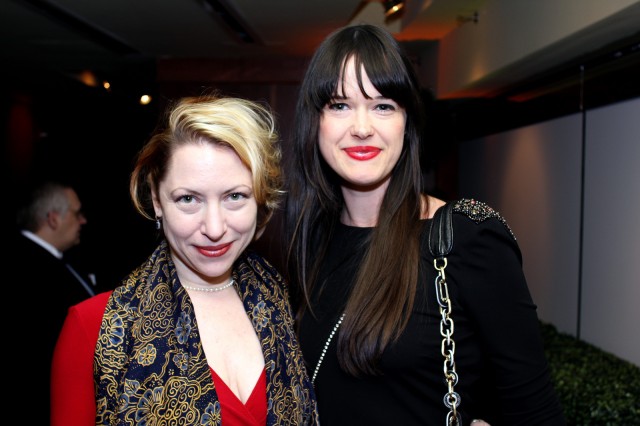 I run into Sophie Gilbert, my favorite Washingtonian Associate Arts Editor, and we head into pre-show reception. Jenn arrives soon after and together with Sophie, Ben Freed, Jon Fischer, and Peter Marks we create a conversation circle of Mediates. We’re like a traveling White House Press Pool. Topics of conversation: who’s the tallest lady at the party (Sophie thinks she’s nabbed the title but Chelsey Christensen points out she wasn’t around) and Jon’s idea of running to District Taco before the curtain rises for some pre-show noms. Jenn engages Peter in some intellectual conversation about theater criticism. Sophie and I see if there are any famous people in the room.

There was a noticeable lack of star power at this year’s festivities, even local celebs like Chris Matthews and Eleanor Holmes Norton, who both presented last year, were nowhere to be found. That doesn’t mean I did not have at least one star struck nanosecond. Ellen Burstyn entered the reception right towards our group. I managed to snap a photo of her, thus satisfying my red carpet obligations without being on the red carpet. 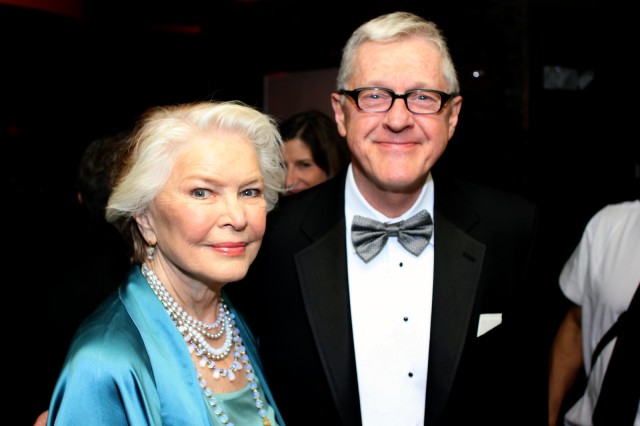 The room feels hotter, but we’re not sure if it was the presence of Ellen Burstyn or the hot lights used as decoration. Regardless we make our way out of the room to the show. Sophie is charmed with visions local cable fame while Jenn remarks on the awkward collision of DC’s arts, corporate, and political spheres.

The show starts and it goes straight to the point: awards. The presenters present nominees and it was clear that we had a night with Helen — and she has to get back to her parents before curfew. I did not object. Less awards’ speeches and more after-party is always a good thing.

The show opened with a photo montage where everybody in the audience cheered when their show/theater/friend/dog was shown. It followed with an introduction of the performers in a sequence ripped straight from SNL with performers enjoying DC at several recognizable locations. Jon felt like it needed more U-Street Taco however. I begin to wonder if Jon has nothing but tacos on the mind. 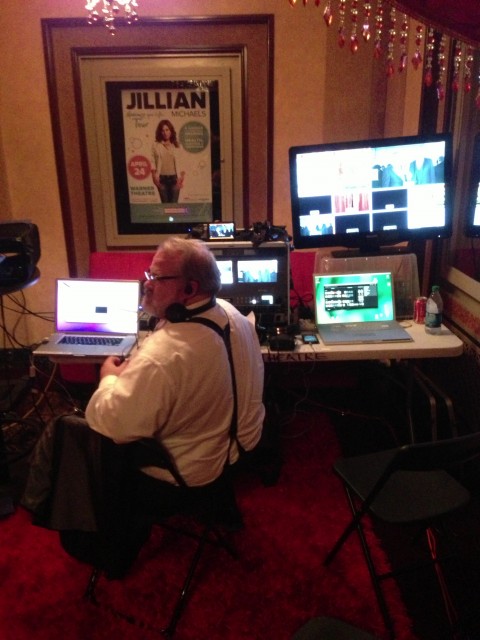 While attendees were watching the awards ceremony live inside the Warner, the rest of the public had the opportunity to watch a webcast of the festivities that were hosted by Bob Madigan and Rebecca Sheir. While Bob and Rebecca did a great job going with the flow of  theatreWashington’s first web-broadcasted Helen Hayes Awards, many did not enjoy the lack of coverage of stuff happening on-stage. The webcast was more behind the stage interviews with winners instead of stuff actually happening during the show.

After talking with theatreWashington this morning, the reason for not actually showing the stuff on stage was because of a limited amount of stage time that could be shown live due to IATSE union restrictions. A bummer I’m sure for the many that hoped to watch the awards from home.

So far none of the winners has worn a tux, giving me comfort in my fashion choices and giving Ben the license to show up next year in jorts.

Jenn falls in love with Maurice Hines while I was pleasantly surprised for Imagination Stage’s The Lion, the Witch and the Wardrobe winning best Resident Musical Ensemble. Dizzy Miss Lizzie’s Roadside Revue accepts the John Aniello Award noting their mission of trying to bring theater to new audiences, a commendable mission.

Linda Levy Grossman then took the stage to tell us some exciting new plans for theatreWashington which includes creating a local database of actor resumes and headshots. Grossman also proudly touted that  DC Arts in the DMV has pumped $1.5 billion into the local economy.

She also announced more theatreWashington created-content covering theater, citing a lack of local media coverage. A few of us didn’t like the subtle jab. 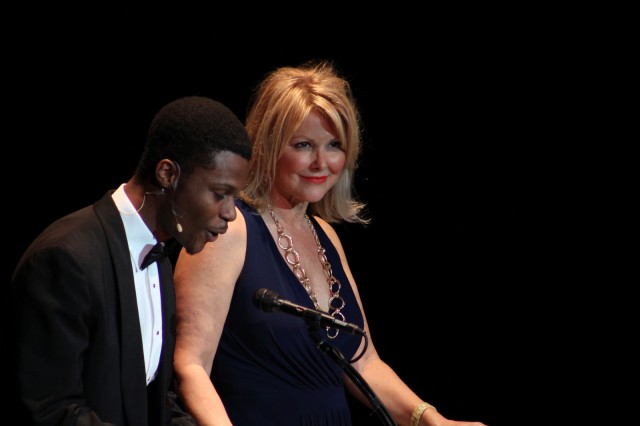 Discussions of flasks from the audience starts as the show trudges along. The two Outstanding Supporting Actor and Actress, Resident Play winners dazzle the crowd with the night’s best acceptance speeches. Matthew McGee from Constellation’s Taking Steps inspired the audience to “take the leap” while E. Faye Butler from Arena’s Pullman Porter Blues shows sass from the podium. After her husband yells to her, “I told you, you could do it!” she replies swiftly with, “Shut up!”

Both actors also end their speeches with words that someone might do in a room full of theater directors and producers: “I need a job!”

Chris Klimek, who was doubled booked, makes his way to the show from another event happy to have such a versatile sports jacket.

This is where the show hit a brick wall. The Helen Hayes Tribute to the Actor’s Equity Association kicked off with a long video that resembled history class. I suspect that they sped through the awards because they knew the show would hit a bump with the tribute.

People start realizing they have sobered up and are now hungry.

However Ellen Burstyn takes the stage in her silk PJs and the crowd is won back over. Sure she’s not Cate Blanchett or Hugo Weaving — but she’s all we got in terms of star power. Also provides a nice ender to tonight’s show meme:

Ellen Burstyn has been an Equity member for 57 years, also needs a job #hha13 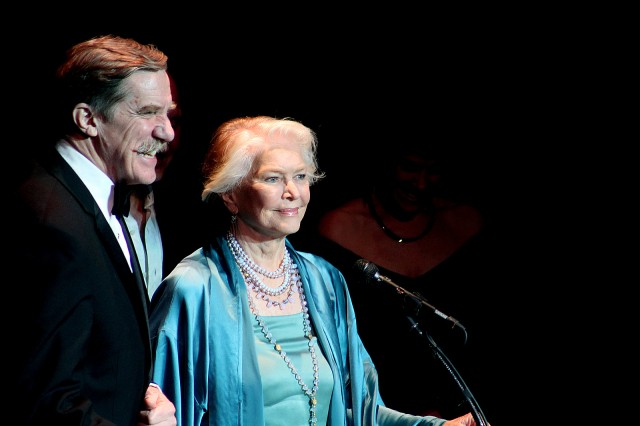 I decide now is a good time to charge my phone. As I reach into my backpack for my Mophie I realized the one thing I forgot to bring: a charge cord for my phone.

This is going to be a long night.

After Dreamgirls and Folger’s Taming of the Shrew take home Best Resident Musical & Play, the show is over and it’s time for the real Drama Prom. I hoof it over to the JW Marriott where I meet-up with Jenn and get to the party.

Number one priority? For some it’s the bathroom, others its food. For Jenn and I? Booze. I order two drinks because I know the line will only get longer as the night goes on. We proceed to stock up on mini-cheeseburgers and grilled cheese sandwiches and camp ourselves in the lobby outside the ballrooms.

A photographer wants to take our photo of us talking so we pretend to talk while she snaps our photo.

A woman across from our couch recognizes me from Twitter and offers her body for a vodka soda.

(Update: Yes I did get her “Vodka, Sprite, with a splash of Cranberry”. As for what happened after, you just had to be there.) 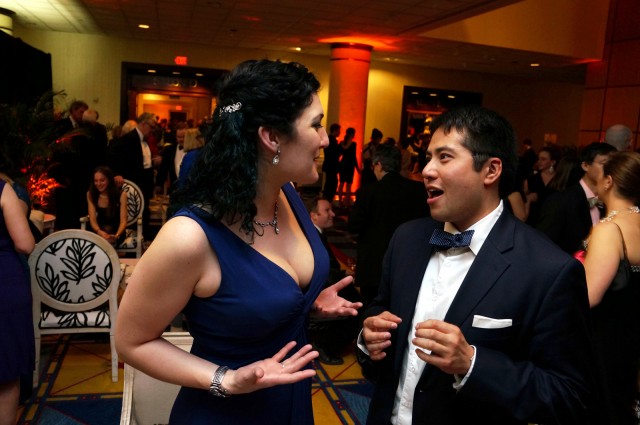 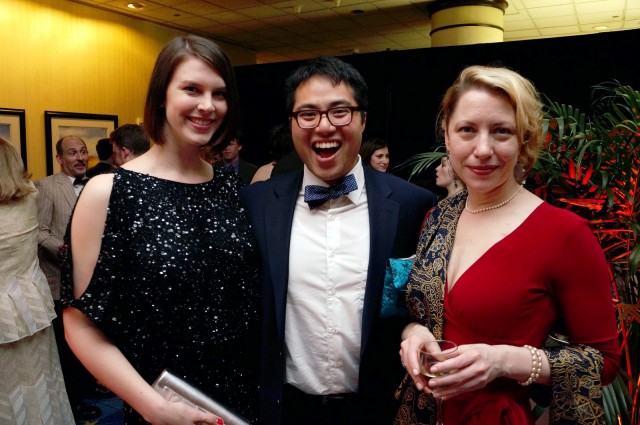 I catch up with Chelsey Christensen as well as several local actors. You can’t always catch up with everybody you want to at Drama Prom but it was real nice to see the friends and colleagues I managed to find.

Actress Donna Migliaccio runs into Linda Levy Grossman and they discover they are wearing the same dress. Awkward.

Donna Stout gets the surprise of her life when her boyfriend proposes to her in the photobooth: 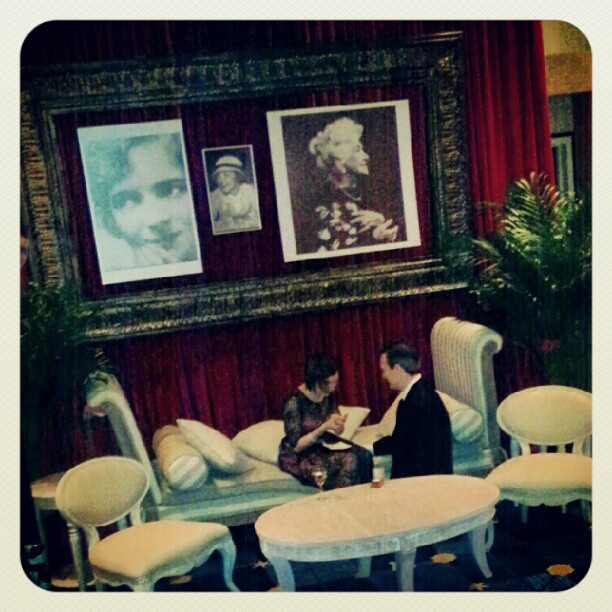 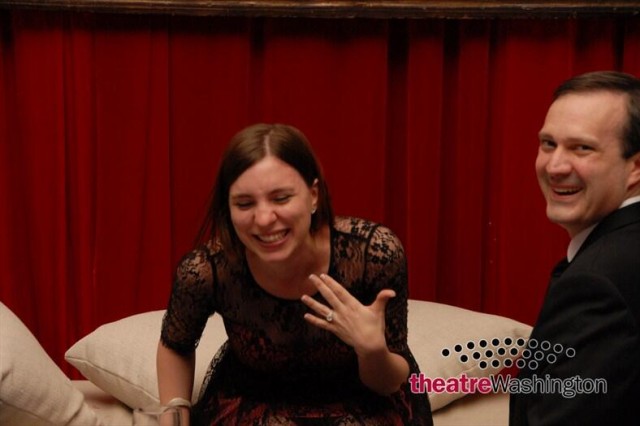 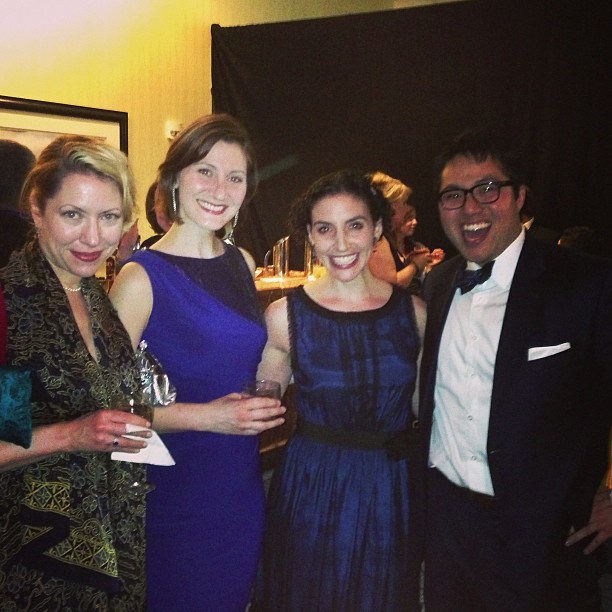 I run into Rebecca Sheir who tells me she’s a fan of We Love DC. My night has been made. 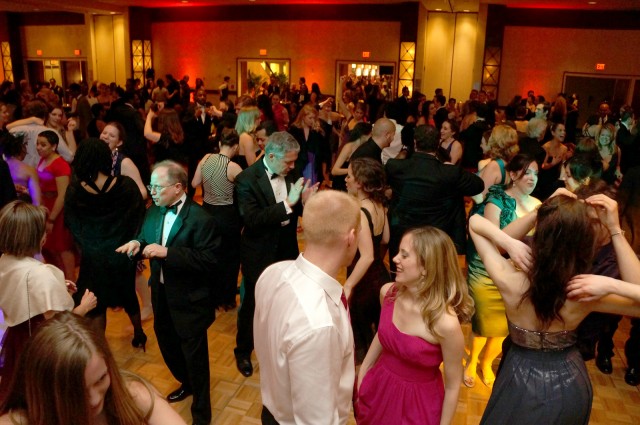 The DJ starts to kick things in gear and the dance party is in full force. However there is a noticeable absence without the half-naked Synetic Theater crew taking over the dance floor. Perhaps we should make sure they get at least one nomination to lock in an entertaining dance party. However Rebecca Ritzel did notice some Washington Ballet dancers jamming to One Direction.

I arrive back to my house after a long night. Another Helen Hayes is in the books. Back to normal life. Well at least for me, some others kept the party going on all night long: