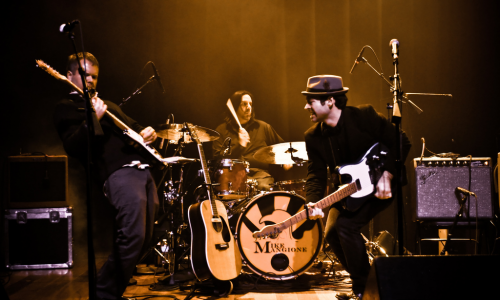 R: It’s been over a decade since you started traveling around the country as a solo singer-songwriter. What would you say are the biggest differences between where you are now with your band musically and where you were when you first started out?

M: Starting off everything was new and in some way a distraction.  I was just excited to be on my own, playing a show, being in a new state, eating at a strange place, drinking with strange people…it all was a wonder at the time.  After the luster and wonder dissipated, silence and reality set in and it became easier to reflect on what I was actually doing.  And for a portion of time in the early days it was, in a certain sense, a waste of time because it was not good.  I do believe it had to happen as part of growing up…so no regrets but it was bad.  What happened eventually is I begun to understand my talents and weaknesses and write in a way that respects both.  Now I feel like I write in my voice, in my own skin and make music that is in some way apart of me.  Also, I;m surrounded by my band, which is like family.  The songs are more realized, dynamic and complex.  It was fun in the beginning but more of an experience, now it is an expression.

R: Describe your songwriting process. Is it more of an individual effort or is it a collaborative effort with the band? Is it a combination of both? Walk us through how that goes.

M: Songs start with me.  I get ideas for the music and melody then sit and wait.  I attempt a little with the lyrics but for the most part I wait for them to come, and they do….eventually.  I then like to get the violin and cello involved and find their melody and harmonies.  After that it’s the rhythm section.  All the while my brother Tom is off somewhere trying out different ethereal guitar parts looking for the best match.  Its a system that really plays to the strengths of the individuals and respects their talent while staying within the vision.

R: Are there any musicians in particular who’ve had a huge influence on your composition style and how you perform?

M: Bob Dylan, Levon Helm, The Band, Van Morrison, Tom Waits, Peter Gabriel, Marley have all had a huge impact.  I love artists that write about the mystery and these guys certainly do.  They write bigger than themselves.  I have always been attracted to art that looks beyond the artist into the greater unknown…what I call the mystery.  So many artists have a tendency to write about themselves and it just stops there.  It may be therapeutic for them, which is great, but it only holds me for a moment…these artists mentioned above all create in a way that reflects on humanity..that inspires me in all aspects of my life.

R: You’ve performed in D.C. before. Do you have any standout memories from past performances or trips to the District that standout?

M: We love the city.  The standout experiences have been with the people we meet here.  We have some great musician friends from this city and that makes all the difference.

Mike Mangione & The Union will be performing at Ebenezers Coffeehouse on Friday April 12 with The Future Laureates and Rachel Levitin. Tickets are available at the door or online. Music starts at 7:30 p.m.