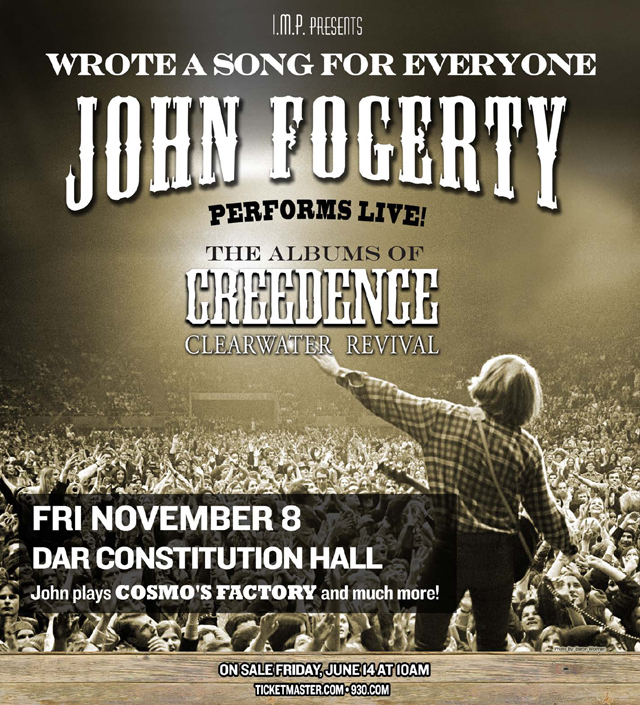 Fogerty–singer, songwriter and guitarist–has sold more than 100 million records, earning 18 gold albums and 10 platinum albums. He was inducted into the Rock and Roll Hall of Fame in 1993, won the Grammy Award for his album Blue Moon Swamp in 1997, and was inducted into the Songwriters Hall of Fame in 2005. In addition, Fogerty and his #1 phenomenal recording “Centerfield” were honored during the 2010 National Baseball Hall of Fame Induction Ceremonies–the first time the National Baseball Hall of Fame has immortalized a musician or song as part of the annual ceremonies.

Fogerty released his newest album, “Wrote A Song For Everyone,” on May 28, and it quickly rose to #3 on Billboard, the highest-debuting album of his entire career. Rolling Stone gave the album a rare five-star review. A celebration of his iconic songbook, the album is a collection of 14 songs: 12 classics and deep tracks (CCR and solo material) from his remarkable canon of hits recorded in collaboration with today’s biggest superstars from the country, pop and rock worlds, plus two brand new solo songs, including the new single and video “Mystic Highway.”

For your chance to win these tickets, simply leave a comment on this post using a valid email address between now and noon on Wednesday. Feel free to leave any comment, but I would like to know your favorite Fogerty solo or CCR song!

One entry per email address please! Tickets for this show are also available through Ticketfly.

Comments will be closed at noon on June 12, and a winner will be randomly selected. The winner will be notified by email. The winner must respond to our email within 24 hours, or they will forfeit their tickets and we will pick another winner.

Tickets will be available to the winner at the Constitution Hall ticket window an hour before showtime on the night of the concert. The tickets must be claimed with a valid ID. The winner must be old enough to attend the specific concert or must have a parent’s permission to enter if he/she is under 18 years old.