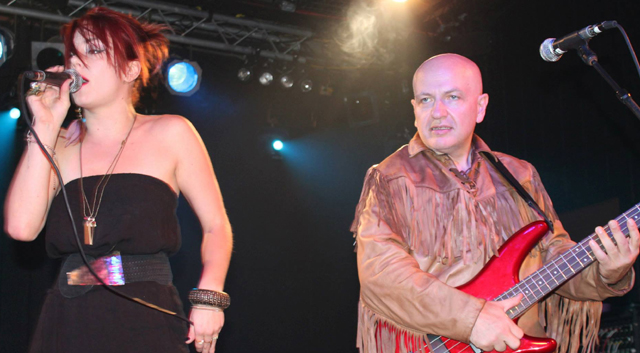 But those songs would like punch if they didn’t have some hyperactive, and sexy, singer purring and yelping and dancing and jumping along with them, and Gorman found a good match with new lead singer Chloe Demetria. Demetria doesn’t try to imitate Lwin but the songs have the same good vibes and vitality they did with the original singer. Demetria’s delivery was clear and consistent, and she hit notes low and high while capturing the irreverent fun of the Bow Wow Wow catalogue.

Hats off also to guitarist Matt Fuller and drummer Tig Moore, who filled out the African pop sounds of Bow Wow Wow’s rhythms. Moore in particular was important to getting the sound of the band right, and he tirelessly thundered through a full setlist of 15 songs.

The full tour in Leesburg was remarkable for its smart use of manpower, which we in the federal city have to appreciate! Moore drummed for all three bands — Bow Wow Wow, The Motels and Gene Loves Jezebel. Indeed, Michael Aston of Gene Loves Jezebel was the sole original member of that band, and he tackled his songs with wry humor. In his mid-fifties now, Aston is ridiculously fit and delighted in attention from his female fans as he danced and writhed on stage. He started out smoking during his first song, but the Tally Ho’s manager came out and literally took the cigarette from him mid-performance, prompting a short protest derived from Adam Ant’s lyrics: “I can’t drink, I can’t smoke, what can I do?”

Aston cleverly made a medley of his own “Beyond Doubt” with the Doors’ “Riders on the Storm,” ripped through “Exploding Girls” (which contains a protest refrain in the form of “I’m not an American”) and closed with the ever-popular “Desire,” with which the audience was happy to sing along. Aston was backed by Gorman and the rest of the Bow Wow Wow band, who adapted well to his darker, gothier material from their own dance-driven post-punk.

Last but certainly not least, Martha Davis and The Motels took the stage for a full set that included classics like “Danger,” “Little Robbers,” “Suddenly Last Summer” and “Only the Lonely.” With three bands presenting significant material from their careers, the evening got a little long, but it was reinvigorating to hear Davis revisit her catalog, particularly the lush but maudlin “Suddenly Last Summer.” Her voice sounded timeless, and she’s handily evaded the fate that befell some of her contemporaries who don’t sound quite the same as they once did. With Davis, I could close my eyes and it was exactly as if I were listening to her on the radio 30 years ago.

I tend to agree that the original lineups of bands with such well-known songs tend to perform the best versions of them, usually because of whatever creative tensions brought those original musicians together in the first place. But The Motels always had a shifting lineup and Davis brought with her a solid set of musicians who knew the material quite well. According to press reports, the others are guitarist Clint Walsh and bassist Brady Wills, along with drummer Moore. The band has good chemistry and a big, full sound that casually slides in around Davis’ sultry vocals without ever threatening to overwhelm them. They are a good combination, and Davis has suggested the lineup will make an album, which could be a very good thing.

The Totally 80s Summer Tour has wrapped up for now, but Martha Davis and The Motels have a big July 4 performance on their home turf in Del Mar, Calif. Leigh Gorman and Bow Wow Wow are continuing to tour out West for the rest of the month and beyond. They are totally worth checking out if they perform near you, and they hopefully will find themselves in bigger and better venues.