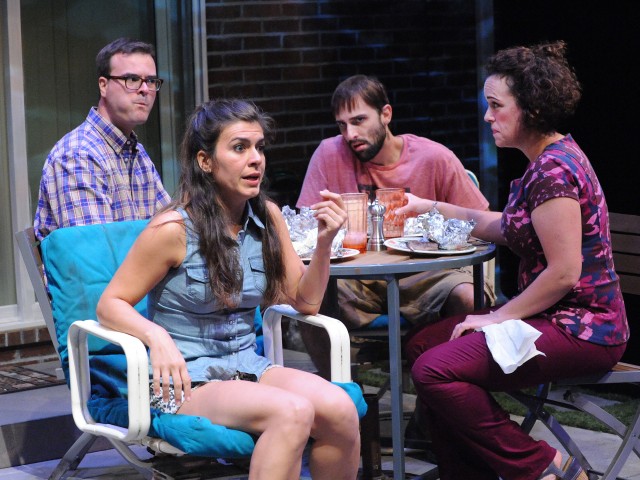 Despite the play’s title, the show’s setting is described as, “suburb outside of a mid-sized American city.” While Detroit works nicely in this context, D’Amour has stated that the show could take place in any metropolitan suburb. All of the 1 hour and 45 minutes of action takes place in the backyard of Mary (Emily K. Townley) and Ben (Tim Getman). They are just your average suburban couple: Mary works as a paralegal while Ben worked in a bank until a recent layoff.

On the otherside of the backyard is a couple who just moved in next door: Sharon (Gabriela Fernandez-Coffey) and Kenny (Danny Gavigan). The two neighbors share very little in common besides a property line: Sharon and Kenny are recovering addicts who have more blue collar careers that don’t make enough cash for them to furnish their newly rented abode. However the two get along through a series of BBQ dinners and bonds are formed. In manic-pixie dream girl-like fashion, the presence of Sharon and Kenny shakes things up for Mary and Ben in ways they never imagined.

The acting and chemistry are strong between the couples, with a slight edge given to the females. Fenandez-Coffey is manic, effusive, and doesn’t hold anything back in her portrayal of Sharon. The comedy lies in her unsolicited openness: she’s that friend that is ready to throw out a story or confession you never asked for. Townley also has moments as Mary, especially when alcohol is in the equation. Overall the cast is a tight unit that makes the comedy in this show come easy.

In between the laughs L’Amour’s message shines through. In Detroit all the characters deal with vices and a sense of quiet desperation, but it is a battle they each fight alone. L’Amour’s view is that there is no more sense of neighborly community and no reason to bother your neighbor for anything anymore. Not even a cup of sugar.