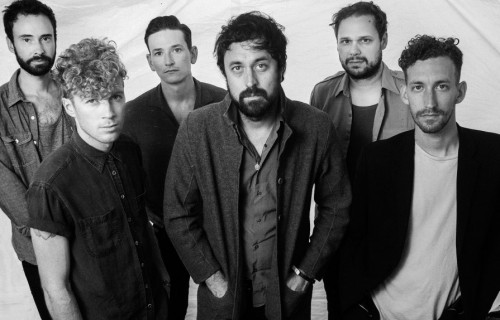 Try to Google “NO.” and you’ll have a hard time finding this LA – Echo Park specifically – based rock group. But keep looking (hint: add “Echo Park”,) the extra 5 seconds of typing/navigation will land you with a band that, after their performance at DC9 last Thursday night, is a strong contender for my artist of the year.

I stumbled across this relatively unknown indie rock group after returning home from another concert and mindlessly turning on my basic cable TV while I fixed myself some noms. Unfortunately, Carson Daly was on. Fortunately, NO. had just begun their set.

Lead singer and New Zealand native, Bradley Hanan Carter had me at hello with his raspy, echoing, rich vocals – think Edwyn Collins – that are profound and emotion-laced. Simply put Hanan is intense on stage. Surrounded by his five bandmates, his ferocity was furthered by his “at the brink of the stage” positioning and long fierce gazes into the crowd. At first, this posturing felt a bit threatening; “Dude, you’re in my personal space and you’re kind of creeping me out!” But quickly you realize he’s not “into you,” rather he’s just uber focused.

Instead of shrinking back which would be my go-to, I felt dared to push through this gazing awkwardness and fear connection, and it yielded one of my most intensely emotional and rocking concert experiences. It definitely helped that between songs Hanan soothed the crowd with his charming LA-NZ accent and sincere, down-to-earth crowd interactions. In reality, he’s a totally accessible, humble, and genuinely nice guy who post-show mans the merchandise booth and freely chats with and thanks fans.

NO.’s debut album “El Prado” has reviewers and critics running rampant with The National comparisons, and the guitar layerings, strong percussion and Hanan’s vocals make this an apt comparison. So yes, If you like The National, you’ll dig NO. especially tracks like “Leave The Door Wide Open” which had the DC9 crowd belting out the chorus.

But for me, NO. takes it further than The Nationals lamentations. I’ve pretty much been listening to “El Prado” non-stop since I bought the CD after the show – yeah, I dug them so much I bought a CD – and I’m not tiring. The album’s lyrics demonstrate a high level of emotional intelligence, self-reflection and honesty, and masterfully gets at one of humanity’s universal struggles: connection to and relating to others during our short, fleeting lives. For me, no tracks do that better than “Last Chance” and “North Star.”

But the album isn’t all about relationship disasters or regrettable acts. It’s also about living a meaningful life, telling your story, expressing emotions, coming to truths and moving through them and beyond. Look to the indie Irish-folk rock (if that’s a genre) track “Hold On” – my personal favorite – and you’ll find beautiful, soul-touching song that acknowledges imperfection, fault and finality of time, but inspires one to stop, be honest with yourself, accept what it is and begin to put one foot in front of another and move forward.

NO.’s show at DC9 had a shockingly small crowd given that it was a Thursday night and that this band is so damn awesome. But I’m not complaining, because with such a stellar first album, this band is definitely going places and will be back. When that happens you’ll find me in the front row connecting back.