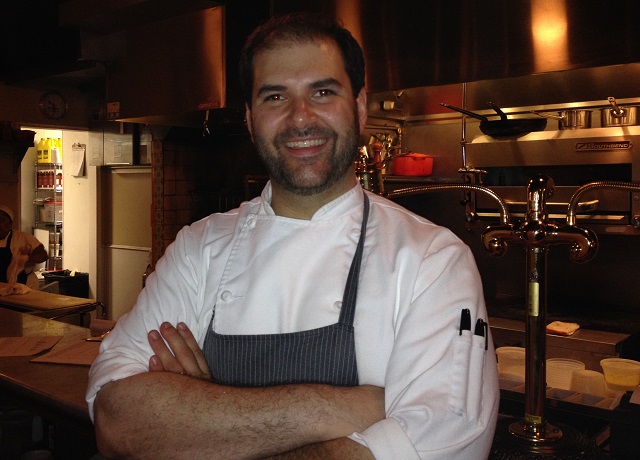 Positively embarrassed that I had not yet eaten at The Red Hen by the time it picked up a few RAMMY Awards last month, I recently slipped up to the 18-seat bar that dominates the room for dinner and a chat with Chef Mike Friedman.

Like myself, Friedman often enjoys eating at bars. It’s more casual and you can talk to the bartender and the people around you. Stroll in for a pasta and a glass of wine and you’ve struck gold. On this particular visit, I’m also very happy to hear David Bowie and the Talking Heads on the restaurant’s sound system, which makes me feel right at home. Friedman’s business partners Michael O’Malley and Sebastian Zutant decide what’s on the radio at the restaurant, he told me.

While good music does indeed make for a comfortable bar experience, there’s way more to The Red Hen, of course.

“Bars drive business to a certain extent. We didn’t want to have a restaurant that was a bar. We wanted to have a restaurant that was a restaurant,” Friedman said. “There is a central bar at The Red Hen where everybody dines. It’s the overflow for people that can’t get tables. It’s rare that you see it three seats back. We usually send people around the corner to Boundary Stone, which is our local bar. And they wait until they get a text from us saying that their table is ready.”

DC restaurants generally have been getting back to basics when it comes to food, Friedman said. And good neighborhood places have been able to excel by taking a more casual approach than some fancier DC staples.

Friedman compared the latest wave of DC restaurants to the scene in Paris some six years ago, when sous chefs were leaving Michelin-starred restaurants to open small bistros of their own.

“We are not at that level Paris was at, but certainly here you are seeing that new wave coming,” Friedman said.

Friedman himself left Proof after several years there to strike out on his own with The Red Hen, which he opened with O’Malley and Zutant well over a year ago as they sought to avoid establishing a concept restaurant.

“When we opened up The Red Hen, we wanted a *restaurant*. We didn’t want any kind of theme to it. People would ask us, well, what kind of restaurant? And at first we didn’t want to tell them. We just wanted to say it’s a restaurant. There is no concept. We are just trying to cook good food. In the end, it leans Italian,” he continued.

Bloomingdale is certainly a neighborhood drawing many new residents, and a revitalized restaurant and bar scene is following them. But a lot of people come to Bloomingdale just to eat at The Red Hen. The crowd tends to split about 50/50 along people from the immediate neighborhood and others from outside who have made it a destination restaurant, Friedman said.

“It’s wild. It’s great for us,” he said. “We’ve been able to garner respect in the neighborhood while still getting some people outside of our realm here. As a rule, we get the same faces every week. It’s awesome. We are very lucky.”

People keep coming back mostly because the food is so damn good. In June, Friedman and The Red Hen won two RAMMY Awards from the Restaurant Association Metropolitan Washington—rising culinary star and best new restaurant respectively. Friedman credited those wins to the entire team at The Red Hen—a strong team that has largely stuck together since its opening in April 2013.

Friedman and his colleagues share a philosophy when it comes to food: Keep it simple.

“There are not a lot of sauces or garnishes on the plate. What you see is what you got,” Friedman commented. 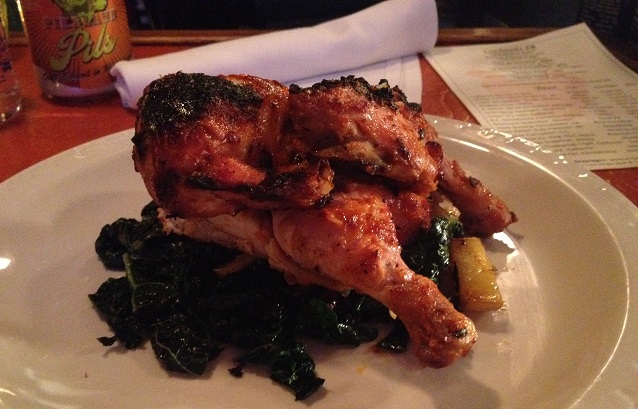 And such was the case with my first meal at The Red Hen—the wood-grilled chicken “Fra Diavolo.” As I recall how delicious it is now, I practically hear Friedman’s description of the plate narrating the meal.

“With the chicken, it has a great marinade; it’s a wonderful product; it’s a New Jersey poussin,” Friedman said. “It’s a very young chicken; it’s got a lot of fat on it. We marinate it overnight; it has great, great flavors.

“Then the grill comes through. We balance it out with some very lovely kale, currants, preserved lemon — kind of a Sicilian thing going on,” he added. “There are not a lot of things hiding there. I really believe if you are going to cook right, you need to be simple and let the ingredients shine.”

I’m told the chicken and the octopus really demonstrate the power of the wood-burning grill, one produced by Grillworks (owned and operated by my friend Ben Eisendrath, in the interests of full disclosure). Friedman said it’s a great source of innovation for him, inspiring smoked ricotta cheese, grilled kale for a halibut dish, grilled scallions for a salsa verde and even dropped embers in canola oil for mayonnaise made from the oil as a smoked aioli.

Popular dishes at The Red Hen include the smoked ricotta crostini, an appetizer of cheese, honey, and vinegar, and the mezze rigatoni with fennel sausage ragu, a classic Italian dish of pasta, meat and red sauce. The pastas at The Red Hen are extruded pastas, unusual for restaurants in metropolitan DC where many others serve fettuccine or stuffed pasta like ravioli, Friedman said. All pastas at The Red Hen are dry, including its unique gnocchi, baked with wild mushrooms and hazelnut pesto. (Extruded pastas are forced through a die, then cut and dried.) 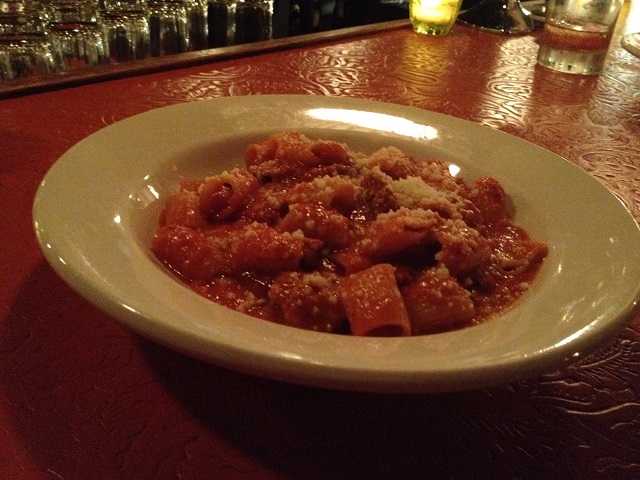 The most surprising thing that Friedman has seen at The Red Hen? His diners’ love of offal, which sells really well. And Friedman knows his offal, having explored it in San Francisco with Chris Cosentino at Incanto. (“Not just potted foie gras and roasted sweetbreads,” he said. “I saw pork blood pudding and raw venison liver and three different kinds of tripe.”)

Friedman plans to keep things fresh at The Red Hen. He has a great love of Alsatian food from his time at French restaurants, including The Modern in New York, where he worked after graduating culinary school. He wants to step up his skills with sausages and to innovate more with vegetables, he said. Space and equipment restrictions have been partly responsible for limiting how much Friedman has been able to do with sausage to date, but he hopes to add something to the menu in late summer or fall.

The chef may have space restrictions in his kitchen, but the guests enjoy a good deal of elbow room. The ambience at The Red Hen is very warm and welcoming. For me, part of that has to do with what’s playing on the restaurant’s speakers. So what would Friedman put on the radio if he were to take over the radio?

It turns out that he likes a bit of everything, although his personal tastes lean towards bands like The Black Keys and Band of Horses these days.

“My father is from the Bronx, and I grew up listening to a lot of Rat Pack music, and that’s something that still registers with me,” Friedman said.

But he also made a reluctant confession.

“I married a woman from Olney, Md., who likes a lot of country music. We go to the beach every year and that’s what’s on the radio — old country, new country.

“My guilty pleasure happens to be country music. I’m not going to lie. I’m kind of embarrassed by it,” Friedman said.

Nothing at all to be embarrassed about, Chef! I know a lot of good men who enjoy a drink during Outlaws at Marx Café in Mount Pleasant. Perhaps I’ll see you there sometime.