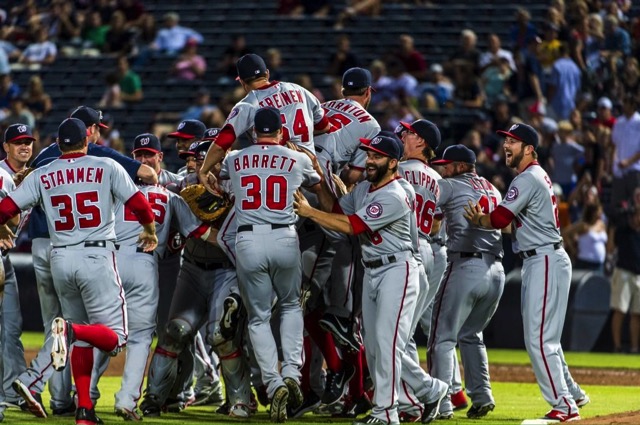 Photo courtesy of the Nationals

It’s going to take weeks for MASN’s Dan Kolko to smell anything except Miller Lite.

The most unremarkable of wins is absolutely the most remarkable. After the Nationals topped the Braves in a 3-0 game that was closer than the score, the Nationals left their spikes in the hallway, and celebrated their second division title in three years. With a 12 and a half game lead on the National League East Division, and 12 games remaining, their position in the postseason is secure. All they have to play for now is home field advantage, something first year manager Matt Williams is keen to acquire.

There are still a dozen to play, and the Dodgers are just a game and a half behind the Nationals in pursuit of that number one position, so don’t expect the Nationals to cruise their way into October. There may be more games off for veterans and rookies alike, but don’t expect anything but a relentless drive toward the postseason. It’s clear there’s unfinished business here for the Nationals.

Tanner Roark and Aaron Harang had traded five inning of shutout ball, parrying challenge after challenge. Harang would blink first, giving up a walk to Jayson Werth, followed by a mammoth home run blast off the bat of Ian Desmond to put that Nats up 2-0.

Roark went seven strong, bringing his total on the season to 192 and a third innings, during which he’s allowed a 1.10 WHIP, with an ERA of 2.85. Roark’s 20th quality start of the year brought him his 14th win. Tyler Clippard and Drew Storen pitched perfect 8th and 9th innings, and then it was celebration time.

While the corks flew, and while Matt Williams quoted Robert Frost, fans across the city were rejoicing in bars, homes and on social media. While it was a disappointment not to clinch the playoffs at home in front of tens of thousands at Nationals Park, clinching it in Atlanta after some early season struggles against them has meaning for many.

During the postgame celebration, for which Dan Kolko has to win some sort of award, there was a lot of discussion of what this season has meant to those playing day in and day out. At one point, Denard Span got very sober in front of the camera and thanked the Lerner Family and Mike Rizzo for bringing him to Washington where he’s been able to play to his potential, and it was a very touching moment, but the reverie was short-lived as someone turned a champagne bottle and a couple of beers on Span and Kolko.

This was a recurring theme of the evening, with Kolko asking great questions, only to be interrupted by the celebrating players with cold beer. In fact, there are some absolutely brilliant vines of this exact thing. My deepest respect to Kolko for doing a hard job well under very difficult conditions.

I really do hope that he can smell something other than Miller Lite today.

The Nationals return home on Tuesday for their final homestand of 2014 before the playoffs. October baseball is returning to Washington.