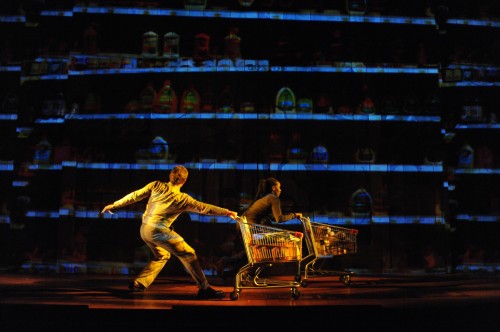 As the sun rises on the stage of Woolly Mammoth Theatre Company’s “Civilization (all you can eat)”, we are shown a farm full of animals. A group of pigs sleep soundly as dawn breaks. All appears well by the barn.

Except this isn’t any ordinary farm- it’s a slaughterhouse.

As the pigs sleep and play, unaware of their impending doom, one pig rises above the rest. Known as Big Hog (Sarah Marshall), this not so little piggy demonstrates an awareness above the rest of the herd and has a plan for freedom.

And thus starts Jason Grote’s world premiere of “Civilization”- his take on the values of America prior to the 2008 election. Grote examines the ideas of consumption, commercialization, and the inner struggle to succeed through several interconnected characters.

David (Daniel Escobar), is a struggling actor who gains notoriety after starring in a funny but crude Twix ad campaign. The commercials were directed by his friend Zoe (Tia James) who hopes to make the leap from ad work to feature films. Also working to make a name for herself is David’s friend Karen (Jenna Sokolowski), who dreams of becoming a reality TV star. Zoe’s husband Mike (Sean Meehan) is an aspiring motivational speaker who hopes to find the answer to the universe through chaos theory. Mike’s sister Carol (Naomi Jacobson) is struggling to make ends meet which has forced her daughter Jade (Casie Platt) to try her hand in amateur porn.

Their stories are intertwined along with Big Hog’s escape from the slaughterhouse in a series of scenes that are broken up with interludes of choreographed movement that depict a society that is always moving, yet the individuals inside it sometimes struggle to keep up.

Grote’s collection of stories come together to form a view of a lost America that knows that they want to make a difference in the world- but are having difficulty trying to find the way to do that. While entertaining and striking, the impact of Grote’s message is loss through a narrative that is a mixed bag in regards to impact.