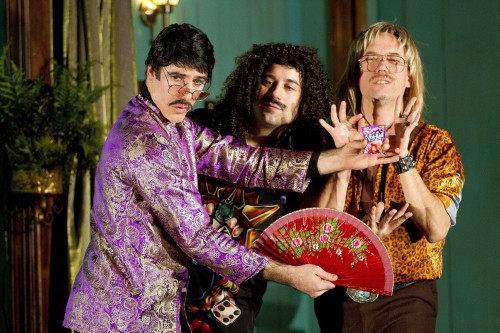 This past weekend I saw magic. No I’m not talking about a win from the hapless Wizards or miracles of that sort- I’m talking about a real magic show with magicians, tricks, and illusions. However this show did not have the showmanship of Houdini, the polish of Copperfield, or the rock and roll of Criss Angel. No the trio of Dennis Diamond, Daryl Hannah, and Louis Magic that star in Arena Stage’s Elephant Room look like a cheesy act that’s more Reno than Vegas.

Not only is there magic, but mustaches and mullets as well.

The look and feel of Elephant Room ties into a line said during the show: “We have nothing new to show you.”

With magic’s biggest secrets since revealed, showmanship is now as important as the illusions themselves. The Diamond/Hannah/Magic wolfpack provides a refreshing new take on the magic show. It is essentially the anti-David Blaine. These men aren’t sporting hard bodies or designer jeans, they look more like extras off the set of Napoleon Dynamite than someone that would lock himself in a ball full of water.

And that’s what makes the show so much fun to watch.