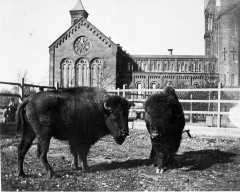 Today in 1846, the U.S. Senate passed the act organizing the Smithsonian Institution by a vote of 26 to 13. The act was then signed into law by President James K. Polk. Among its provisions the Organic Act specifies a Board of Regents, Chancellor and Secretary and a suitable building with rooms for the reception and arrangement of objects of natural history including: a chemical laboratory, a library, a gallery of art, and lecture rooms. The Act also provided the transfer to the Institution of all objects of art, natural history, etc., belonging to the United States to Washington and the deposit in the Smithsonian of one copy of all publications copyrighted under the acts of Congress. Once established, the Smithsonian became part of the process of developing an American national identity—an identity rooted in exploration, innovation, and a unique American style.