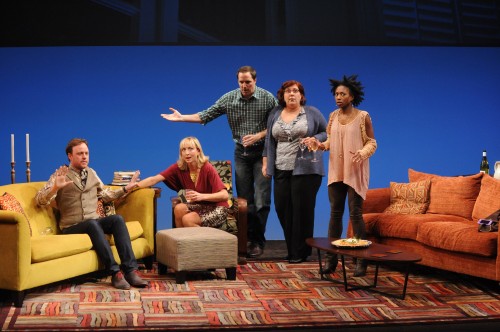 Tom Story as Will, Kate Eastwood Norris as Ana, Eric Messner as Rob, Ashlie Atkinson as Jen and Rachael Holmes as Lily in Arena Stage at the Mead Center for American Theater’s production of The Book Club Play. Photo by Stan Barouh.

Despite being an avid reader, I’ve somehow missed out on the whole book club phenomenon. Maybe it’s that whole Groucho Marx "I refuse to join a club that would have me as a member" thing. So when it came time to see Karen Zacarias’ The Book Club Play at Arena Stage, who better to bring along than a friend with intimate knowledge of not one but two book clubs, someone whose involvement was so consuming she once proclaimed she was "breaking up" with book club?

"Is this anything like your book clubs?" I whispered to my friend at intermission.

"No, not really" she laughed with a wicked insider smile, "but it’s funny."

That may neatly sum up the issues with The Book Club Play. It skims the pages, lightly playing with issues like the devolution of the literary canon (is Twilight really the Wuthering Heights of our day?), and the social dynamics of readers with different commitments and backgrounds. But even in its construct, it owes more to reality shows than literature.

It’s a funny reality show though, to be sure, with broadly sketched characters against a cartoon-colored set. It’s even divided into "chapters" announced across the bottom of the stage as the various books from the sacred (Moby Dick) to the profane (The DaVinci Code) are introduced, just like some sitcoms do. END_OF_DOCUMENT_TOKEN_TO_BE_REPLACED