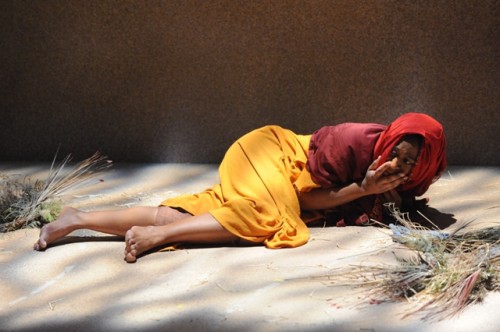 “Plays like this make me so grateful I was born at the time and place I was,” my friend says as we exit Theater J Saturday night. We’d just seen In Darfur by Winter Miller, and as a Western woman who’d spent the day shopping for frivolities, I felt the cold twist of shame in my stomach. But this isn’t a preachy production. Its simplicity provides the horror, and it’s truthful. These things happen. We ignore them. Then we see a simulation of a woman’s legs being cracked apart like a wishbone, and our silence feels culpable.

This is a hard sell, no denying it, but I urge you to go see In Darfur, playing now through April 18. The play is inspired by Miller’s own trip to refugee camps along the Chad-Sudan border, in the company of Pulitzer Prize winning journalist Nicholas Kristof of The New York Times. Strangely, its flaws have to do with that prism of experience, as the two Westerners who serve as our entre to this world – an American journalist and an Argentinian aid worker – are simply not as compelling as the Africans they encounter. But I still urge you to see it, for Erika Rose’s central performance as Darfuri refugee Hawa is absolutely riveting.

The action unfolds in 2004, the aftermath of the initial atrocities committed during the conflict between the Darfur rebel groups, the Sudanese government, and the government-armed militias known as Janjaweed. Hawa, a Darfuri Muslim, has lost her entire family and been brutally raped – she is then further brutalized for being raped. Pregnant and wounded, she becomes the central pawn in hardened journalist Maryka’s (Rahaleh Nassri) quest to get Darfur on the front page, blocked by aid worker Carlos (Lucas Beck) in an ethical battle over whether endangering Hawa’s life to get the story out is worth the price she’ll pay. END_OF_DOCUMENT_TOKEN_TO_BE_REPLACED