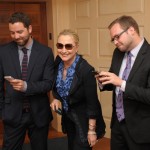 In an interesting turn for The Internet’s Latest Meme: Texts From Hillary,  Secretary of State Hillary Clinton invited the Meme’s creators to meet with her and receive her own submission for the site.

The tumblr, which collects and produces fictional text conversations between celebrities and Secretary Clinton, has been burning up the web ever since it was created last Wednesday. Adam Smith, the Communications Director of campaign-finance nonprofit Public Campaign, says that it’s been a crazy week ever since.