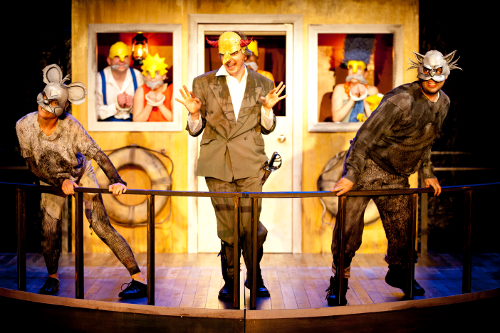 The determination to keep what’s lost alive, to create elusive meaning out of chaos, is at the heart of theater’s beginnings. Sounds lofty, but it’s behind both great drama and crass comedy. Anne Washburn’s Mr. Burns, a post-electric play is all of the above, a brilliant mash-up of The Simpsons, apocalyptic movies and origin myths. Above all, it’s the universal cry to make sense and keep laughing after a devastating crisis. And it proves true that one generation’s pop culture can morph into classical canon in one hundred years.

Everyone who loves The Simpsons has a favorite episode, one that they can still recite lines from (I used to do a killer Ralph Wiggum, “You choo-choo-choose me?” and yes, I own a beer can opener that sings out Homer proud, “Beeeeer. Yes oh yes whoo-hoo!”). If you can’t quite remember the line, well, just pull it up instantly online and push play, keeping your memory evergreen. Simple. But what if you could never refresh your memory, not for your favorite line, song, anything? In a “post-electric” world, the work would eventually be lost.

Or rather, it would mutate into something different, perhaps equally valid, or even greater.

That’s the challenge facing the characters in Washburn’s play. They’re clearly survivors, but we don’t know the precise nature of the catastrophe that’s blown the grid, causing nuclear meltdowns and the disintegration of society. They aren’t sure themselves, as they huddle together in uneasy social alliances for safety and warmth, exchanging lists of loved ones with every outsider in an attempt not just to find the lost but keep their memory alive. In the dark of night, they start to do what humans have always done to keep fear at bay – tell stories.

In this case, recreating The Simpsons’ “Cape Feare” episode. Sideshow Bob as Robert De Niro as murder Max Cady? Singing HMS Pinafore? Unfamiliar? You might want to watch it before you go. It’s not essential, but the play is stuffed with rich references.